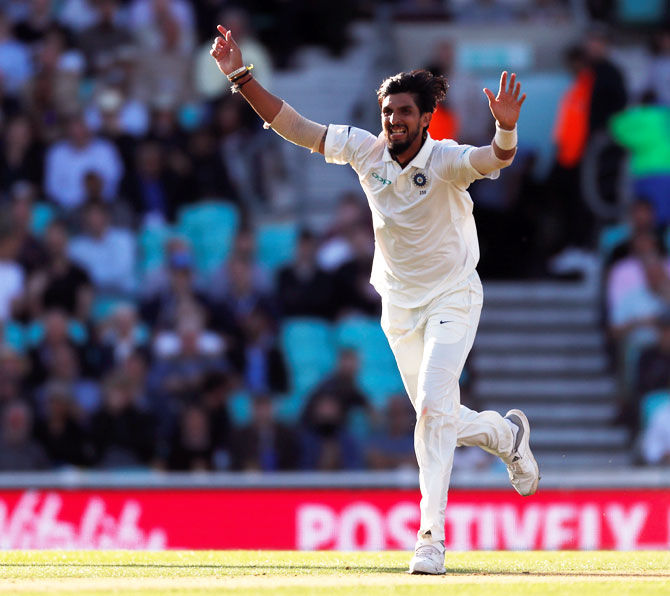 Ishant Sharma struck thrice to lead India's sensational fight back as the visitors reduced England to 198 for 7 at stumps after Alastair Cook hit a memorable half-century in his career's final match on day one of the fifth Test on Friday.

Ishant (3/28) picked up three wickets, while Jasprit Bumrah (2/41) and Ravindra Jadeja (2/57) struck twice each to trigger England's collapse in the final session of the opening day.

The 33-year-old Cook, who will retire from international cricket after this Test, produced a 190-ball 71-run innings to give England a good start before the hosts lost six wickets for 75 runs post tea to collapse from 123-1 to 198-7 at stumps. 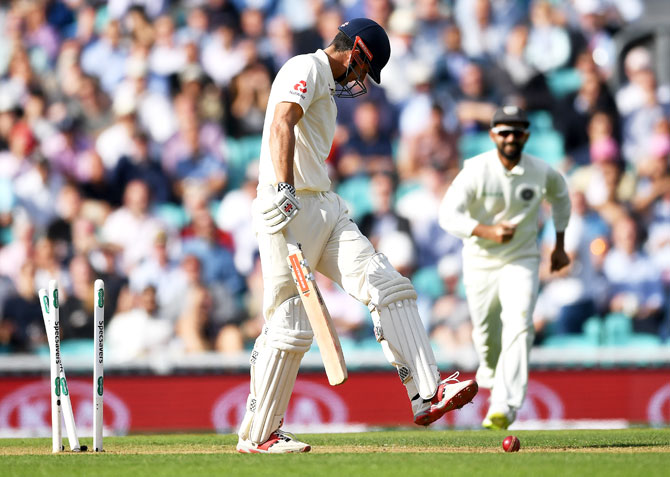 IMAGE: Alastair Cook reacts after being bowled by Jasprit Bumrah after his knock of 71. Photograph: Gareth Copley/Getty Images

The hosts were going strong at 133-1 when Bumrah dismissed Cook and Joe Root (0) in the 64th over and then Ishant removed Jonny Bairstow (0) in the next over to reduce the hosts to 134-4.

Moeen Ali tried to resurrect England's innings with a patient 50 off 170 balls but Ishant returned to take two wickets in three balls in the 83rd over as England further slipped to 181 for 7.

Mohammed Shami (0-43) also toiled throughout the day and was immensely unlucky to not have picked up any wickets.

Post tea, Bumrah and Ishant started off with brilliant spells again, and this time they got deserved rewards. 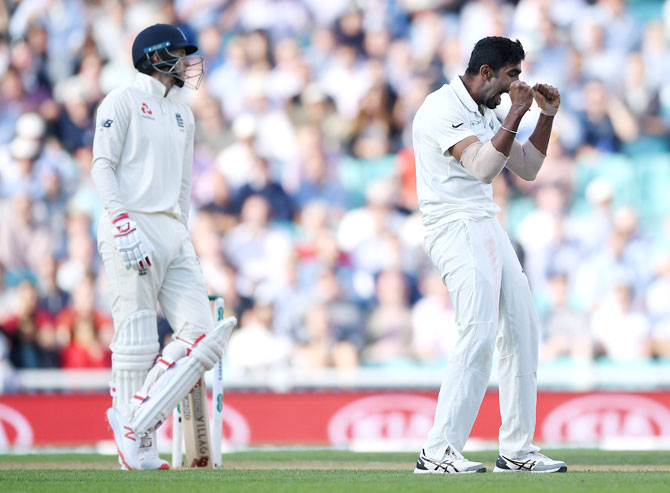 Cook's dismissal started the collapse. He was bowled playing on off Bumrah in the 64th over. He put on 73 runs with Ali for the second wicket.

It became three wickets in nine balls as Bairstow nicked a Sharma delivery and was caught behind. It was some consolation for keeper Rishabh Pant who had a tough day behind the wickets as the ball seamed a lot after tea.

Ben Stokes (11) and Ali put on 37 runs for the fifth wicket and stemmed the downfall. The latter scored his 13th half-century off a slow 167 balls in this interim.

Jadeja began the slide again, as Stokes was trapped lbw in the 78th over. Having played and missed through the day, Ali finally managed to nick Sharma behind in the 83rd over.

It was again a quick triple-hit as Sharma had Sam Curran (0) dismissed for a duck, the batsman edging behind as he looked to leave the ball.

Shami bowled a threatening spell, but Jos Buttler (11*) and Adil Rashid (4*) survived till the end somehow. 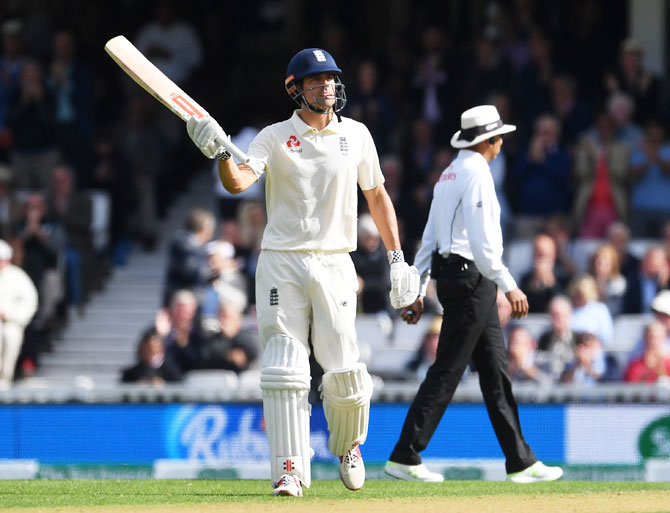 Earlier, Alastair Cook chiselled out an unbeaten half century on his England farewell as the hosts reached 123-1 at tea on day one of fifth Test against India at the Oval on Friday

The 33-year-old, who announced his retirement from international cricket on Monday saying he had "nothing left in the tank", showed why he is his country's leading Test run scorer with a gritty 66 not out from 177 balls.

With England having taken a decisive 3-1 series lead in Southampton, all eyes were on former captain Cook as he began his 161st and final Test, eager to end a magnificent 12-year career with a flourish. 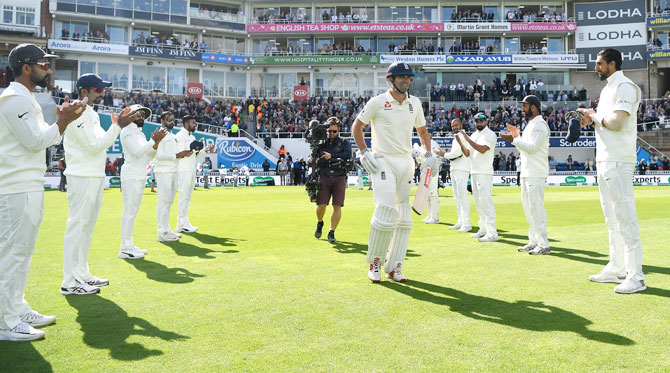 IMAGE: England'S Alastair Cook is given a guard of honour by India players as he walks out to bat. Photograph: Gareth Copley/Getty Images

He received a thunderous ovation from the packed stands as he walked on to a sunlit pitch through an Indian guard of honour to open the batting after England won the toss.

The crowd, many wearing chef hats in his honour, rose again midway through the afternoon session when Cook pushed Mohammed Shami for two runs to reach his 57th Test half century -- the first by an opener in a series in which ball has dominated bat.

After a run of low scores the cricketing Gods shone on Cook. He was dropped on 37 but on a day of old-fashioned Test combat with precious few runs being gifted, the resilience and calm that have taken him to sixth on the all-time list of Test run scorers shone through.

After an emotional entrance there was relief all round as Cook got off the mark by pushing Ishant Sharma through the covers for three, taking him past 1,000 Test runs at the Oval. 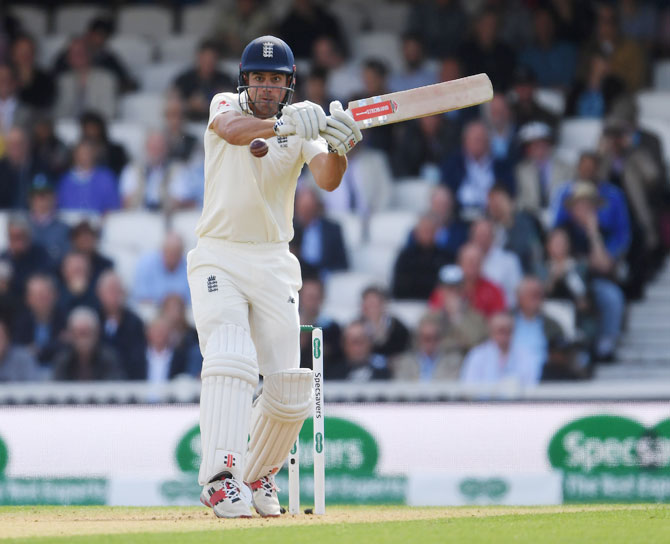 Cook struck successive boundaries off Jasprit Bumrah in the day's ninth over, the first cut hard through square and the second a majestic pull off a shortish delivery.

But mainly it was a day for quiet accumulation and steadfastness against a luckless Indian attack.

The spotlight on Cook disguised the fact that Keaton Jennings, his fellow opener, is battling to nail down his place as England plan a future without a man who began the day with 12,254 runs to his credit. 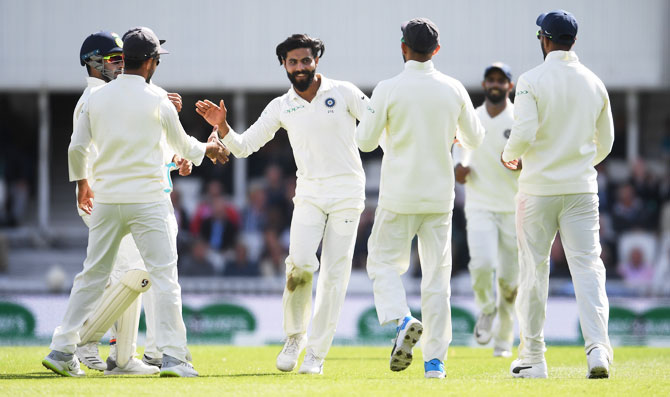 Jennings fell into a trap having reached 23 though, nudging a delivery from spinner Ravindra Jadeja straight into the hands of KL Rahul at leg slip. The 60 opening stand was the highest by either side in the series but that was scant consolation for Jennings who looked livid at his soft dismissal.

England were 68-1 at lunch but led a charmed life after it as Bumrah, Sharma and Mohammed Shami repeatedly beat the bat. 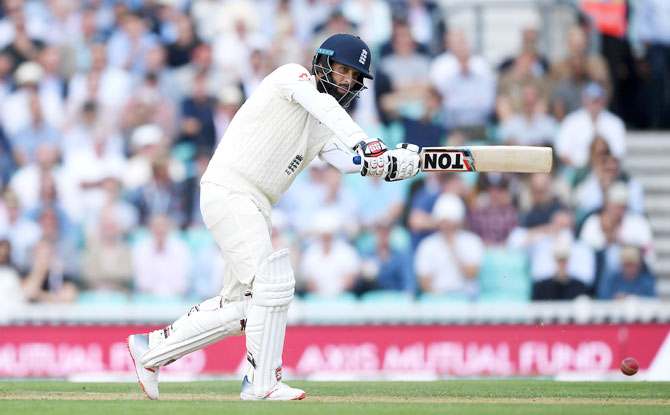 Cook was squared up by Sharma but Ajinkya Rahane spilled a low catch then Moeen, batting at three so skipper Joe Root can drop to four, swiped at Bumrah and the ball flew to Virat Kohli at third slip but he could not cling on.

Moeen then survived a review having shouldered arms to a Bumrah delivery that nipped back to clip the top of his pad. 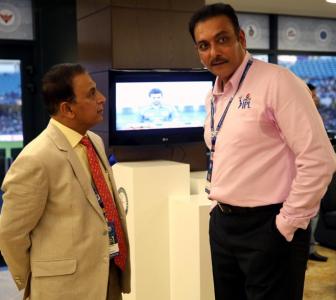 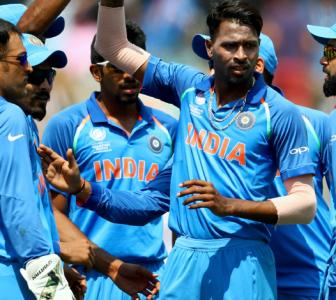 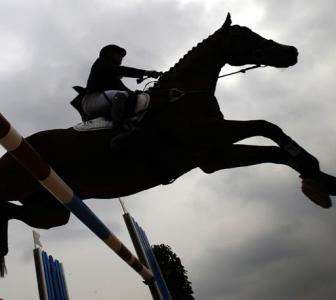 Cook gets guard of honour from Indian team 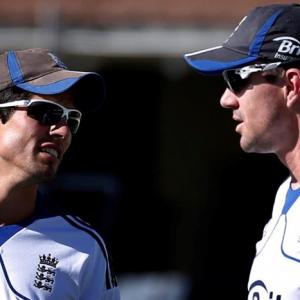