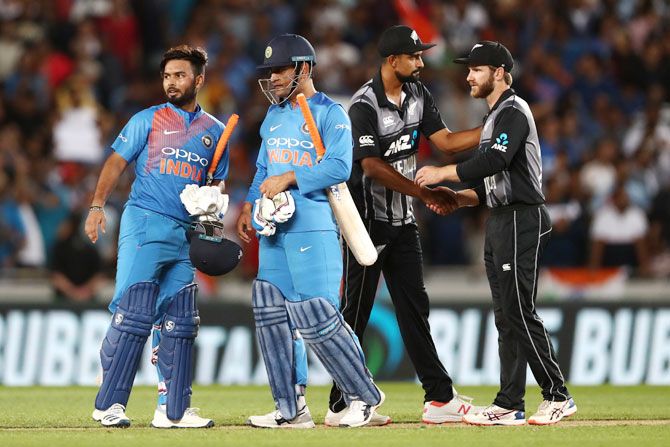 Mahendra Singh Dhoni watched from across the pitch as his heir apparent Rishabh Pant showed spunk and style in a tricky situation, guiding India to a comfortable seven-wicket victory against New Zealand in the second T20 International in Auckland on Friday.

The chase was set up by skipper Rohit Sharma (50 off 29 balls) in the company of Shikhar Dhawan (30, 31 balls) with a 79-run stand after Krunal Pandya got three wickets to restrict the hosts to 158/8.

Scoring a whirlwind fifty, Rohit also became the top run-getter in the shortest format of the game, surpassing Martin Guptill.

Dhoni, the original master finisher couldn't have been happier as he saw Pant control what could have been a tricky 159-run chase with an unbeaten 40 off 28 balls. The series is now tied 1-1 with the decider in Hamilton on Sunday. 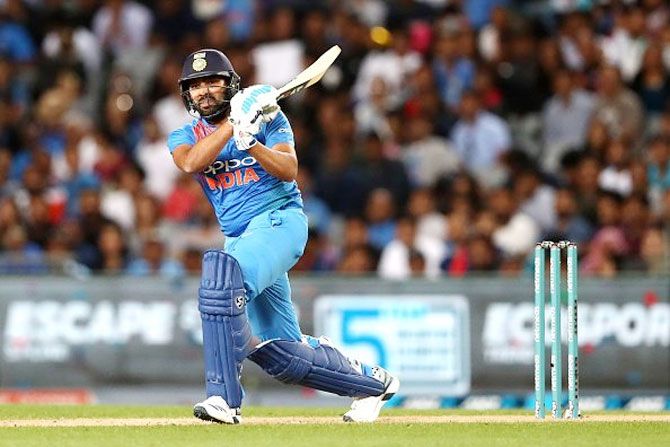 IMAGE: Rohit Sharma scored 50 off 29 balls to give India a good start in the chase. Photograph: Hannah Peters/Getty Images

With the former India captain (20 no off 17 balls) playing the role of a mentor at the other end, the 44-run stand was very significant as Indian cricket slowly moves towards a change of guard in the coming days.

Pant's one-handed six off Tim Southee or the bowler's back drive off Scott Kuggeleijn to finish off the match were reminiscent of Dhoni's best days. He hit four boundaries and a six in all.

The openers’ dismissal, including that of Vijay Shankar did create a bit of unrest but Pant ensured that they didn't press the panic button.

The innings would certainly help him make a strong case for being included in the World Cup squad. Earlier, Krunal Pandya enhanced his already growing reputation as a steady short format bowler with three important breakthroughs as India restricted New Zealand to a below-par 158/8 in the second T20 International in Auckland on Friday.

The parsimonious Krunal (3/28 in 4 overs) dismissed Colin Munro (12) and skipper Kane Williamson (20) to peg the Black Caps back.

In between, Krunal also got the controversial wicket of Daryl Mitchell (1), who fell pray to an umpiring howler, when 'Hotspot' showed a clear inside edge onto the pads.

However, Colin de Grandhomme, who has played for KKR in the IPL, then counter-attacked, scoring a blistering 50 off 28 balls, adding 77 runs with Ross Taylor (42 off 36 balls) for the fifth wicket.

Once De Grandhomme was sent back to the dug-out by Hardik Pandya (1/36 in 4 overs) and Taylor was run-out, New Zealand's chances of a big total went up in smoke.

It was a much-improved performance by the Indian bowlers with Bhuvneshwar Kumar (1/29 in 4 overs) removing Tim Seifert (12) in the very third over with a fuller delivery, inducing an inside edge to Mahendra Singh Dhoni behind the stumps.

However, it was Krunal, who really applied the brakes after being brought inside the Powerplay overs.

The older of the Pandya brothers quickly found the ideal length, bowling his usual wicket to wicket deliveries with a flatter trajectory. Both Munro and Williamson got skidders. While the left-handed opener Munro hit one straight to the cover, Williamson was caught plumb in-front.

However, it was the dismissal of Mitchell that once again raised the 'Spirit of Cricket' debate even though it was a clear case of an umpiring howler by TV umpire Shaun Haig.

Krunal angled one into Mitchell, who got an inside edge onto the pads. The on-field umpire adjudged him leg before and he promptly asked for DRS.

As the giant screen showed that a faint edge could be detected by Hotspot, to everyone's dismay, TV umpire Shaun Haig pressed the red button to signal out.

After that, it was left to India captain Rohit Sharma to call the player back but he didn't do so.

At 50 for 4, it was De Grandhomme, who took charge as he attacked Yuzvendra Chahal (0/37 in 4 overs), hitting him for a couple of sixes.

When he was just about threatening to take the game away, De Grandhomme smacked one straight to covers in skipper Rohit's hands.

India bowled 35 dot balls, which could well be decisive in the final context of the match.

Young Khaleel Ahmed (2/27) also polished off two wickets in the end and he and Bhuvneshwar bowled 18 dot balls between them.