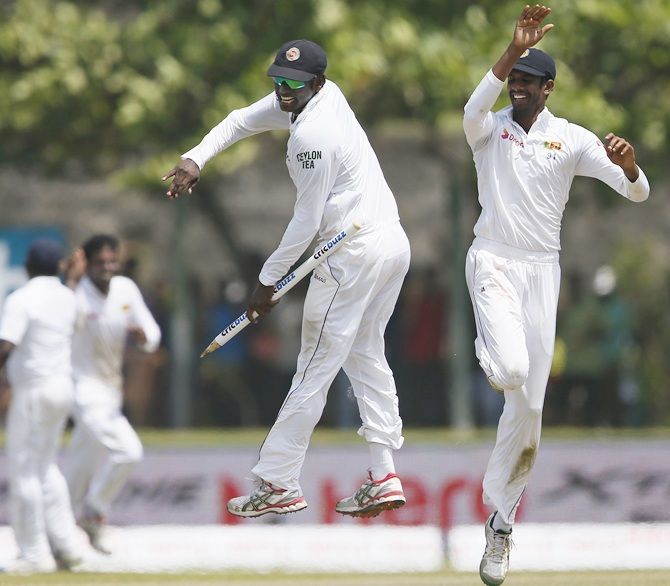 In an extraordinary twist to the game, India on Saturday capitulated to an embarassing 63-run defeat in the first cricket Test against Sri Lanka, who scripted one of the most remarkable turnarounds in recent Test history.

Set a tricky victory target of 176, the listless Indians surrendered tamely to be skittled out for their lowest score of 112 in just 49.5 over to give the islanders a 1-0 lead in the three-match series. Left arm spinner Rangana Herath scalped 7/48 and Tharindu Kaushal took 3/47 as the lankans bamboozled the Indians to bundle them out in just 41.5 overs today and wrap up the Test match in three half days on a track which gave some assistance to the slow bowlers.

It was a dramatic performance from the hosts who came back from the dead after conceding a massive 192-run first innings lead to turn the table on the Indians who had themselves to blame for the debacle. The Indians allowed the hosts to wriggle out of a precarious 95-5 in their second innings just at the stroke of lunch on Friday with Dinesh Chandimal changing the complexion of the game with a brilliant counter-attacking 162 not out. India's Rohit Sharma reacts as he walks off the field after his dismissal by Sri Lanka's Rangana Herath. Photograph: Dinuka Liyanawatte/Reuters

From then on, the Lankans clawed back into the game. India's ploy of going into the game with five specialist bowlers at the cost of sacrifing a batsman also backfired badly as they did not have the batting firepower to chase even a modest target.

The Indian batsmen, for some strange reason, went into the fourth day's play with a defensive frame of mind and Shikar Dhawan took as many as 36 balls to score his first run in the morning. The knuckle injury he suffered in the first innings did not help his cause.

Though the Indians are regarded as good players of spin bowling, they showed a shocking lack of technique and foot work on a pitch that had no real demons. 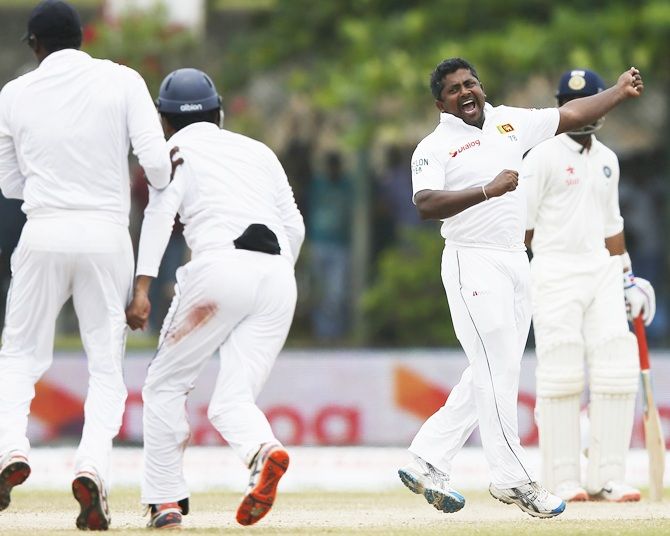 Ajinkya Rahane (36) and Shikhar Dhawan (28) were the only two batsmen who could hang around for some time as wickets kept tumbling with exasperating regularity with six wickets falling for 55 runs in the pre-lunch session.

Kaushal claimed the last wicket of Amit Mishra to trigger scenes of celebrations in the Sri Lankan camp as the players hugged each other to celebrate a memorable victory.

The Indian collapse began in the morning as Herath picked up his 22nd five-wicket haul in Test cricket. He picked up 4/24 in the first session as the visitors lost 6 wickets for only 55 runs, whilst chasing 176 to win. Shikhar Dhawan and Ishant Sharma started from their overnight scores of 13* and 5* respectively, with India placed at 23/1.

It was an expected slow start from both, with Dhawan looking to get his eye in while Ishant looking to spend as much time at the wicket as possible. In the meantime, Lankan pacers Dhammika Prasad, Nuwan Pradeep and skipper Angelo Mathews bowled 7 overs between them before spin was introduced.

Playing cautiously proved to be a mistake for India, as only 7 runs had come off the pacers. Dhawan was excruciatingly slow, taking 36 balls to score his first runs of the day, that too a lemon-cut back to the boundary. Then, the spinners were deployed and they got on top immediately.

Ishant was the first to go in the 15th over, trapped LBW by Herath off the very first ball he bowled. Rohit Sharma (4) walked in at number four and didn’t last long, out bowled by Herath in the 19th over.

Three overs later skipper Virat Kohli (3) was out as Kaushal Silva took a diving catch at forward short leg off Kaushal. Drinks were taken at that stage and India were placed at 45/4, losing 22/3 in the first hour’s play. India's Shikhar Dhawan reacts as he walks off the field after his dismissal by Sri Lanka's Tharindu Kaushal (not pictured). Photograph: Dinuka Liyanawatte/Reuters

The carnage didn’t stop as the session resumed though. Ajinkya Rahane (36) joined Dhawan in the middle, with the latter deciding to play some shots.

They added 15 runs for the 5th wicket and helping India cross the 50-run mark. But Dhawan’s ploy wasn’t very successful, making odd-looking attempts, and ultimately threw his wicket away in the 28th over as Kaushal took a brilliant return catch.

Three overs later, Wriddhiman Saha (2) was stumped as he charged at Herath. Runs were coming only in trickles, but there were wickets aplenty this morning, as Harbhajan Singh (1) was sent back in the 33rd over then, caught close by Silva again.

Post lunch, it was only a matter of time, though it remained to be seen if Rahane could muster some magic with R Ashwin and others.

It wasn’t to be, as Ashwin was out caught at mid-on in the third over after the break, with Prasad taking a good catch off Herath. It brought Amit Mishra (15) to the crease and together with Rahane he batted for 7.3 overs.

That period raised some hopes of a stunning turn-around for the two batsmen negotiated the spin bowlers easily, and indeed scored some runs as well. They put on 21 runs helping India cross the 100-mark in the 46th over.

Any hopes were soon dashed as Rahane got a faint edge off Herath in the next over and Mathews pouched it nicely at first slip.

It was only a matter of time thereafter and Mishra was caught superbly at silly point by Dimuth Karunaratne off Kaushal in the 50th over of the innings to seal a stunning comeback for Lanka. Varun Aaron (1*) was unbeaten at the other end.

The two teams will now travel to Colombo for the second Test to be held at the P Sara Oval from August 20.