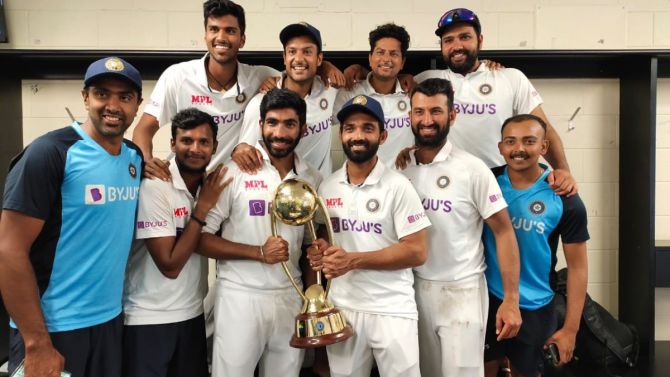 India head coach Ravi Shastri on Wednesday said that since the penny has finally dropped, the realisation of defeating Australia in their own backyard is starting to sink in.

On Tuesday, Australia's fortress -- The Gabba -- was finally breached. It took 32 years and two months, but the unthinkable was achieved as an injury-ravaged young Indian team beat Australia by three wickets to take the series 2-1.

"Now that the penny is beginning to drop one realises what the boys have gone through to achieve what they have in COVID and quarantine times. Take a bow guys," Shastri tweeted.

As India wrapped up a famous 2-1 series win over Australia on Tuesday, Shastri gave a special speech to laud the efforts of every player and he went on to say that every member of the squad has been outstanding on the tour.

The last time a visiting team came out triumphant from the Brisbane Cricket Ground was back in November 1988 when the mighty West Indian outfit under the leadership of Viv Richards thrashed Allan Border's team by 9 wickets.