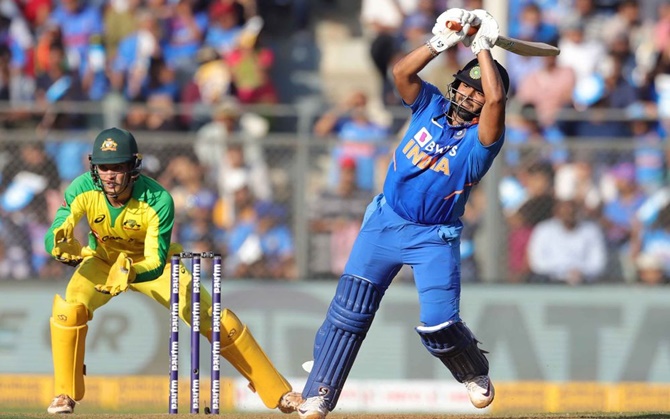 IMAGE: Rishabh Pant bats during the first ODI against Australia at the Wankhede stadium, in Mumbai, on Tuesday. Photograph: BCCI

Wicketkeeper-batsman Rishabh Pant suffered concussion, forcing K L Rahul to take his place behind the stumps during the first ODI against Australia, at the Wankhede stadium, on Tuesday.

"Rishabh Pant has got a concussion after being hit on his helmet while batting. K L Rahul is keeping wickets in his absence. Pant is under observation at the moment," read a statement from the Board of Control for Cricket in India.

Pant scored 28 off 33 balls during India's 255 all out after being sent in to bat by Australia.

While Rahul kept wickets during Australia's innings, Manish Pandey came in as an on-field replacement for Pant.

Australia hammered India by 10 wickets in the series opener, their biggest win against the sub-continental giants.