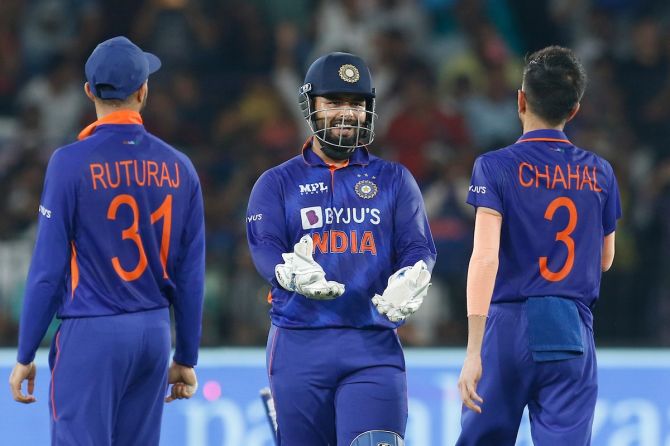 A distraught skipper Rishabh Pant made no bones about the uninspiring performance of the two leading spinners Axar Patel and Yuzvendra Chahal, urging them to come good after another meek surrender at the hands of South Africa in the second T20 International, in Cuttack, on Sunday.

While Axar could be given only one over in which he conceded 19 runs, Chahal was equally bad as he was smashed for 49 runs in four overs. In the two games, Axar has given away 59 runs in five overs while Chahal has gone for 75 in six overs.

"The spinners have (need) to come (perform) better into the game," Pant said at the post-match presentation ceremony without elaborating much.

He admitted that a total of 148 for 6 was probably 15 runs short despite the track being two-paced in nature.

"Bhuvi (Bhuvneshwar Kumar for his 4/13) and all other fast bowlers though bowled very well. We were short in the second half and the things did not go our way."

"The bowlers started really well, but after 10-11 overs, we did not bowl well and that's where the game changed. We thought we were going to do similar things (as the South African bowlers). In the last three matches, we will look to win," his answer lacked conviction.

Man of the match Heinrich Klaasen is happy that he could play such a knock as it would 'extend his career'.

"I am glad the knock came against India. I hope it extends my career longer. I haven't performed well in the last couple of years. I am very happy and confident to be here," Klaasen said.

He was selected as regular keeper Quinton de Kock sustained a wrist injury.

"Quinny (De Kock) came up to me two days back in the team bus and said he injured his wrists. I thought he is a strong character and he will be fine. But yesterday again, he said his hand is not fine. Yesterday morning, we came to training and the coach told me I might play."

His skipper Temba Bavuma was happy how things panned out.

"It was a tricky chase. They got the ball to talk with the new ball, it was tricky. I was just trying to hold in and allowed Klassen to come and do what he does best. We could have been clinical at the end but the result is what matters," Bavuma said.

"Klaasen can do a lot of damage with a couple of ball. He adds a lot of value to our batting. It is about whatever your role is," he was all praise for Proteas' hero of the second game.