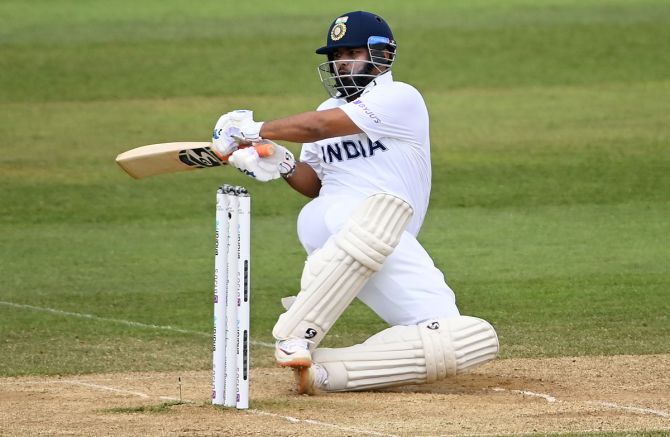 Rishabh Pant's stature as a Test batsman has grown considerably in the last couple of years, especially after his heroics with the bat in Australia when he helped an injury-ravaged India beat the odds to win their second successive Test series Down Under earlier this year.

'How can you resist someone who reverse-ramps James Anderson with a brand new ball for six? Pant must be the least predictable batsman ever: there is no knowing what he will do to the next ball,' reasons Berry.

'But those who seek to imitate should note he often plays himself in -- eg 50 off 82 balls then the next 50 off 33 in his Ahmedabad century - before becoming the ultimate fielding captain's nightmare.'

Interestingly, Rohit Sharma, who doesn't boast of a good Test record away from home, finds his name in the Berry list ahead of Cheteshwar Pujara or Ajinkya Rahane.

'A delight to the eye in his home setting, as the embodiment of orthodox strokeplay, but even more in contrast to his England counterparts. No trigger movements beyond a flexing of his toes; no chest-on stabbing with the back shoulder taking over; no playing across the line in defence.'

'And the strokeplay -- real stroking, never trying to hit the ball too hard -- from the first person to score two double-centuries in ODIs, and three of the eight so far,' Berry notes in the London newspaper. 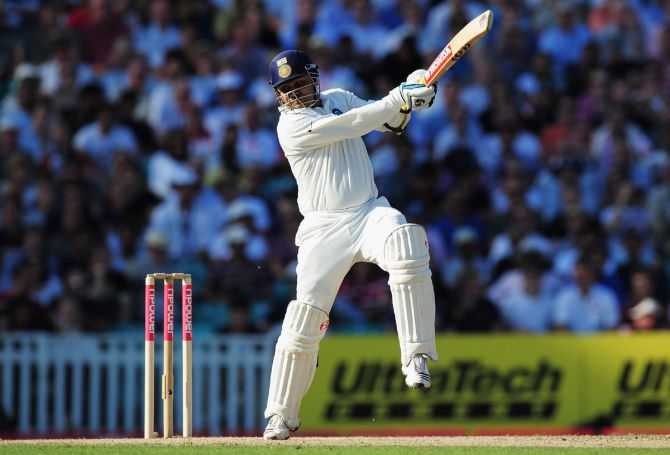 Berry ranks Virender Sehwag -- the only Indian batsman to score two triple Test hundreds (he came close to scoring a third triple ton) -- No 1 on his list.

'He raised the bar by scoring faster than any specialist batsman in Test history -- five runs an over off his own bat. Masterpieces like 319 off 304 balls v South Africa and 293 off 254 v Sri Lanka.'

'But the clincher: A Bangalore Test v England, Ashley Giles bowling over the wicket and into the rough, and Sehwag running down the pitch to hit him inside-out over extra-cover -- does any stroke involve so many muscles? - and legside. Genius,' exclaims Berry.

The Englishman is completely blown by Kohli's impact on Indian cricket. 'Kohli is also the most charismatic of Indian cricketers, the most expressive, seemingly the most emotional, and the fastest between wickets. Pure boxoffice.'

'A player of great innings-- his 281 in the follow-on against Australia in Calcutta arguably the greatest of all time in Tests -- rather than a great player. What brought out the best in him was the ball bouncing about waist-height: those steely wrists would then whip the ball legside or cut,' Berry says of Laxman.

'In 1984, this spindly student ambled out and scored a century against England in his first three Tests. To English eyes it was geometry gone mad: The ball always disappeared at right angles to where it had come from. The straighter they bowled, the more they disappeared through square-leg. His wrists must have been tungsten,' he states about Azharuddin. 'No right-hander was easier on the eye than Gavaskar in full flow,' Berry declares about SMG, also hailing Gundappa Vishwanath's batting heroics, especially his 222 in the Chennai Test against England in 1981-1982.

'He could cut anything outside off-stump, off any length, whether square or late. England had three in-fielders and a sweeper for his cutting in Madras in 1981-2 and he still made the highest innings to that point for India against England, 222. Delightful all round as a batsman and person, and at his best when West Indies were at their best.'

Of Tendulkar, Berry writes: 'Never forget how strong he was: To make up for his size at school he would beat all-comers at arm-wrestling. This strength enabled him to be the first Indian batsman to conquer in Australia as, intent on dominating, he went up on his back foot and blazed away.' Berry says watching Dravid bat was an education on how to play spin. 'Very compact, solid and defensive for much of his career, but he blossomed in front of English eyes at any rate when he educated us in the way to play spin.'

Agree with Scyld Berry's choices? Who would you list as India's Top 10 Batsmen?: Please let us know by posting in the message board below: