'I'm particularly looking forward to the competition between Australia's pace bowlers and Virat Kohli. That should be a great contest' 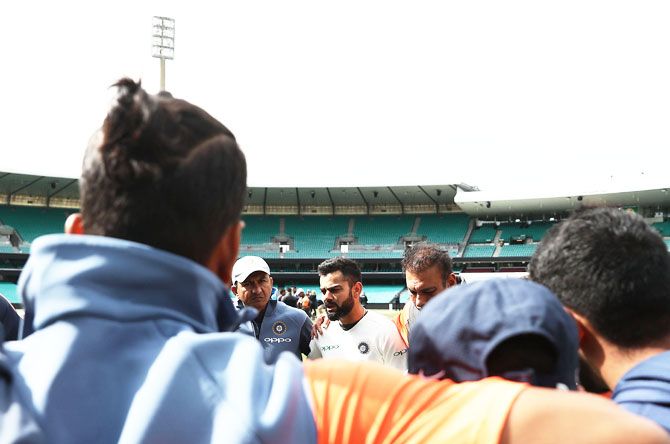 IMAGE: 'I am going to pick Australia, but don't ask me why I am picking them. I think the only reasonable reason I can give is that I was disappointed the way India played in England and I thought they should have won that series'. Photograph: Mark Metcalfe/Getty Images

Ian Chappell believes India would be "missing" something in the Test series against Australia and will end up on the losing side despite things looking good for the tourists on paper.

The Test rivalry, which has risen in stature and intensity over the years, will be renewed with the latest assignment starting December 6 in Adelaide.

Australia would be without top batsmen Steve Smith and David Warner who were banned in the aftermath of the ball-tampering scandal that rocked the team earlier this year.

"I am going to pick Australia, but don't ask me why I am picking them. I think the only reasonable reason I can give is that I was disappointed the way India played in England and I thought they should have won that series," Chappell told ESPNCricinfo.

"Certainly, on talent, they should beat this Australian side, but there might just be something missing. The other thing is the Australian attack.

"...I'm particularly looking forward to the competition between Australia's pace bowlers and Virat Kohli. That should be a great contest. Last time he was here, Kohli played really well," he said.

Another positive for India, according to Chappell, is their pace bowlers, who did quite well in England.

"They got the ball to move around. I'm not sure they will get the same kind of assistance in Australian conditions, so I'm interested to see how they bowl, and I think those two things could tell a big story in the series," he said. Asked about India coach Ravi Shastri's recent assertions of this being the best travelling Indian team in the last 15 years, Chappell said there are reasons to agree with it to an extent.

"I think it is one of the better teams to come from India, and certainly, as far as the fast bowlers are concerned, they are better suited to Australian conditions than any other pace-bowling attack I have seen come from India.

"But while things look good on paper for India, that has got to be translated into form on the field," he said.

On Australia, Chappell said the hosts would be surprising quite a few if they manage to put 350-plus totals on the board consistently.

"I think you have to be a supreme optimist to think about Australia getting 350-400 runs regularly in the Test series. If they can get 350 occasionally, it will surprise a lot of people, me being one of them," he quipped.

Chappell said India will be handicapped significantly by the absence of all-rounder Hardik Pandya. Pandya is out nursing a back injury.

"...because he was the balance to the team. If you had Pandya there under Australian conditions, he could perform as your third seamer and you could play two spinners in places like Adelaide and Sydney, where I think it is very handy to have five bowlers," he said.