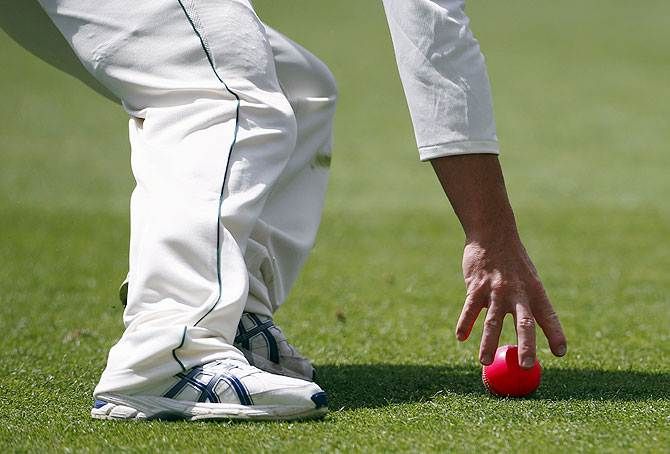 IMAGE: The pink ball was used for the first time in the third Test between Australia and New Zealand at the Adelaide Oval in November 2015. Photograph: David Gray/Reuters

Pakistan and the West Indies will play a day-night Test in Dubai from October 13-17, making it the second ever five-day international match to be held under lights.

The Pakistan Cricket Board on Thursday released the itinerary for the home series against the West Indies in the United Arab Emirates, which will include three Tests, three One-day Internationals and as many T20 Internationals.

Interestingly, the PCB has opted for just three ODIs although their team is languishing at ninth in the ICC rankings and requires to win more matches to climb the ladder and avoid having to qualify for World Cup 2019.

According to the itinerary, the day-night Test will be organized with a Kookaburra pink ball after the West Indies cricket board agreed to the experiment.

The West Indies have been given a three-day practice match against the PCB patrons eleven under lights at Sharjah to prepare them for the day-night Test.

The series, which the PCB unsuccessfully tried to move to Sri Lanka, begins with the T20s from September 23 in Dubai.

The two other T20 matches are scheduled in Dubai and Abu Dhabi on the 24th and 27th followed by the ODI series on September 30, October 2 and 5 in Sharjah and Abu Dhabi.

The Test matches are scheduled from October 13-17 in Dubai, October 21-25 in Abu Dhabi and October 30 to November 3 in Sharjah.

The PCB also announced it will be holding eleven matches of its premier first class competition, the Quaid-e-Azam Trophy under lights with the pink ball as it tries to embrace the concept of day-night Tests.