Three more Pakistan players are under scrutiny for spot-fixing, a Pakistan Cricket Board source told Reuters on Wednesday.

"The PCB?today had discussions with these players and has told them to submit details of their assets and accounts," the source said after attending a PCB integrity committee meeting.

Three Pakistan players -- Test captain Salman Butt and pace bowlers Mohammad Asif and Mohammad Amir -- have already been suspended by the International Cricket Council and are under investigation on spot-fixing allegations.

The trio, who have denied wrongdoing, are suspended while newspaper allegations that they fixed parts of games during the tour of England which finished in September are investigated.

The PCB source did not name the latest three players to come under scrutiny.

Pakistan have delayed naming their squad for the forthcoming one-day series in New Zealand and a preliminary squad for next year's World Cup while investigations continue, the PCB said.

"All the issues relating to the clearance of players came under discussion. The committee decided that further consideration of this matter is required," the PCB said in a statement.

"The ODI squad for New Zealand and that for the World Cup will be announced at a later date."

Chief selector Mohsin Khan said that the squads could only be announced once the board gave clear instructions about players under consideration.

"We need to get a clearance from the integrity committee for each player only then can we announce the squads," Khan said.

© Copyright 2022 Reuters Limited. All rights reserved. Republication or redistribution of Reuters content, including by framing or similar means, is expressly prohibited without the prior written consent of Reuters. Reuters shall not be liable for any errors or delays in the content, or for any actions taken in reliance thereon.
Related News: Pakistan Cricket Board, Mohsin Khan, New Zealand, International Cricket Council, Mohammad Asif
COMMENT
Print this article 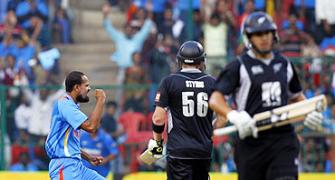 SL board uncertain over touring Pakistan in 2011