Bangladesh tour of Pak a matter between two nations: ICC

ICC President Alan Isaac said Bangladesh's proposed tour of Pakistan next month was a matter between the two nations and the governing body's role was limited to deploying match officials for the series.

-PCB to send four-member delegation ahead of India tour

"The matter of Bangladesh touring Pakistan is a matter for the two competing nations. While everyone would like a time when international cricket could return to Pakistan should the security situation allow, the ICC's role is only on whether or not to deploy match officials," Isaac, who is on a two-day visit to Bangladesh, said.

"The process is clear. First Bangladesh and Pakistan have to confirm the tour is taking place, then they have to supply a security plan and only at that stage do ICC make an assessment with regard to the match officials," he pointed.

Issac, during his trip to the nation, will hold a meeting with the Bangladesh Cricket Board and will also meet Prime Minister Sheikh Hasina.

The President, who spent some time watching the final-day proceedings of the first Test between hosts Bangladesh and the West Indies, said: "The trip gave me not only a chance to meet the new Bangladesh Cricket Board President Nazmul Hassan and new ICC Vice President AHM Mustafa Kamal but also to see Test cricket at its most exciting."

"If there was ever a match which encapsulated the enduring appeal of Test cricket and its unique narrative, it was this clash between Bangladesh and the West Indies.

"It is a real pleasure to be in Bangladesh and I am grateful for the warm and hospitable welcome that I have received. It was enlightening to see the outstanding academy facilities as well as hear the ambitious plans for future developments in Bangladesh, the hosts of the ICC World Twenty20 in 2014," Issac said.

Source: PTI© Copyright 2020 PTI. All rights reserved. Republication or redistribution of PTI content, including by framing or similar means, is expressly prohibited without the prior written consent.
Related News: ICC, Bangladesh Cricket Board, Issac, Alan Isaac, Pakistan
SHARE THIS STORYCOMMENT
Print this article 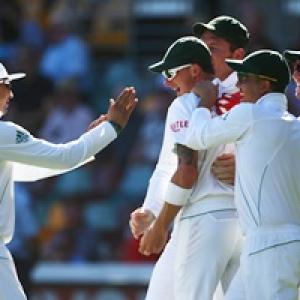 Proteas fuming after new book- The Art Of Losing