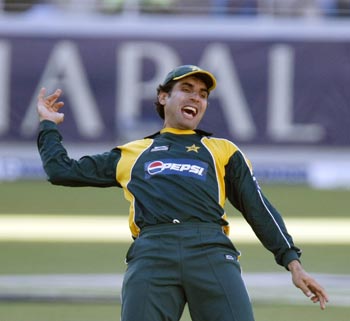 Pakistan have dropped senior batsman Misbah-ul-Haq from the squad to play New Zealand and recalled opener Imran Farhat after nearly three years out of the team.

Pakistan are scheduled to play four One-day Internationals and two Twenty20 matches against the Kiwis in Abu Dhabi and Dubai before travelling to New Zealand for a Test series.

"We have decided to give Misbah a rest and he will be considered for the tour of Australia and can concentrate on playing domestic cricket," chief selector Iqbal Qasim told a news conference on Thursday.

"We have problems with finding a reliable opening pair and we have decided to give Farhat another chance," Qasim added.

© Copyright 2021 Reuters Limited. All rights reserved. Republication or redistribution of Reuters content, including by framing or similar means, is expressly prohibited without the prior written consent of Reuters. Reuters shall not be liable for any errors or delays in the content, or for any actions taken in reliance thereon.
Related News: Imran Farhat, Khalid Latif, Muhammad Aamer, Shoaib Malik, Umar Gul
SHARE THIS STORYCOMMENT
Print this article
Akmal, Razzaq thwart India
Ban on 6 more Pakistan ICL players off
Pakistan omit Akmal from Asia Cup probables