The historic opening Test between Pakistan and Sri Lanka in Rawalpindi has been marred by rain since the opening day of the match. 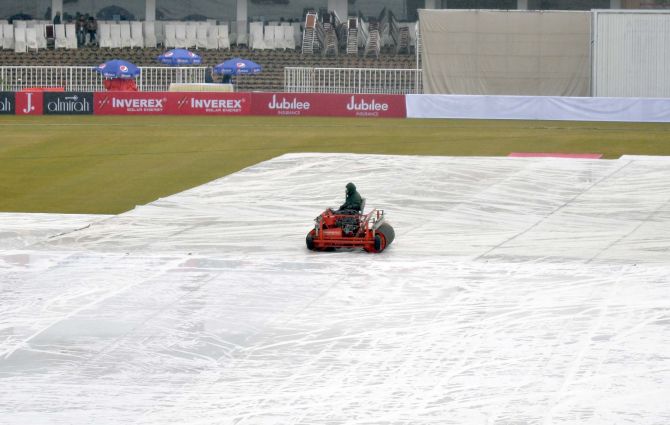 IMAGE: The covers stay on the pitch as rains lash the ground on Day 4 of the opening Test in Rawalpindi on Saturday. Photograph: Pakistan Cricket/Twitter

The fourth day of the opening Test between Pakistan and Sri Lanka in Rawalpindi was called off without a ball being bowled on Saturday due to rain and a wet outfield.

The two-match series marks Pakistan's first Tests on home soil since a militant attack in 2009 on Sri Lanka's team bus in Lahore.

The weather-hit opening match has not had full play on any of the four days and not even one innings has been completed since tourists Sri Lanka won the toss and chose to bat.

Sri Lankan batsman Dhananjaya de Silva will hope play will resume on the final day to allow him to score the 13 more runs he needs to complete his sixth hundred in Tests.

Dilruwan Perera was not out on six at the other end with the touring side on 282 for six wickets.