File picture: The Indian team in a huddle during their nets session in Dharamsala in 2013. Photograph: BCCI

Bolstered by their dramatic come-from-behind win in the last game, India will look to keep the winning momentum going when they clash against West Indies in the fourth One-Day International in Dharamsala on Friday, on what is expected to be a pacy track.

The series is locked at 1-1 and the picturesque Himachal Pradesh Cricket Association stadium will provide the perfect setting as the two teams square off to seize the initiative before the final match of the series is played at Eden Gardens on October 20.

India's series-levelling victory in the second match in New Delhi was combination of West Indies' self destruction while cruising towards an easy win and also inability to play on a track where there is some turn on offer.

The spin duo of Ravindra Jadeja and Amit Mishra exploited the helpful conditions perfectly as West Indies lost eight wickets for 45 runs in their pursuit of a competitive total of 263.

However, India might find it difficult for their spinners to extract same kind of help from the track in Dharamsala as they have done from 22-yard strip in Delhi.

Notwithstanding the erratic display from the Caribbean batsmen, the battle in the backdrop of the Dhauladar mountain range should be exciting, considering the fast and bouncy nature of the pitch.

There is always a chance of rain in the hills. Therefore even a light spell of shower will further aid the pacemen besides making the conditions colder.

Both teams stayed back in Delhi after the third ODI in Visakhapatnam was called off due to cyclone Hudhud and arrived in Dharamsala, which is situated at an altitude of 1317 metres above sea level, only on Thursday morning. File picture: The Indian team warm up during their nets session in Dharamsala. Photograph: BCCI

Facing a decent West Indies pace attack on a lively surface will be a test for the Indian batsmen. The home team had a tough time batting first here against England in January 2013, when it lost half its men for 79 runs before going on to lose the match.

The best thing to come out of the Kotla game for India is Virat Kohli hitting some sort of form after a prolonged lean patch.

A gritty 62 on a typically low and slow Kotla wicket must have done his confidence a world of good. It also proved Mahendra Singh Dhoni's decision to drop Kohli down the batting order at four behind Ambati Rayudu worked and India is expected to stick to the same sequence. Chief curator Sunil Chauhan has promised the wicket will assist the fast bowlers and that might make either captain consider a four-pronged pace attack. In that scenario, leggie Amit Mishra could make way for Ishant Sharma.

With pitch offering some bounce and lateral movement, Ishant's hit-the-deck type of bowling might just be ideal for this kind of track.

The World Cup not being far away and Ishant would like to throw his hat in the ring for being one of Dhoni's trusted lieutenant in the pace bowling department when the marquee event starts in February next year.

While the Indian pacers haven't exactly set the stage on fire during the two ODIs, one man, who has surely impressed is Mohammed Shami.

Shami, with eight wickets from two games, is now the highest wicket-taker in the series and by far looked the best pacer on view during the death overs with his consistent deliveries in the blockhole.

Though young left-arm spinner Akshar Patel has been included in the squad for the last two ODIs, he is unlikely to make it to the playing eleven as two left-arm spinners would make the attack one-dimensional.

It also seems rookie chinaman Kuldeep Yadav will have to wait longer for his international debut. 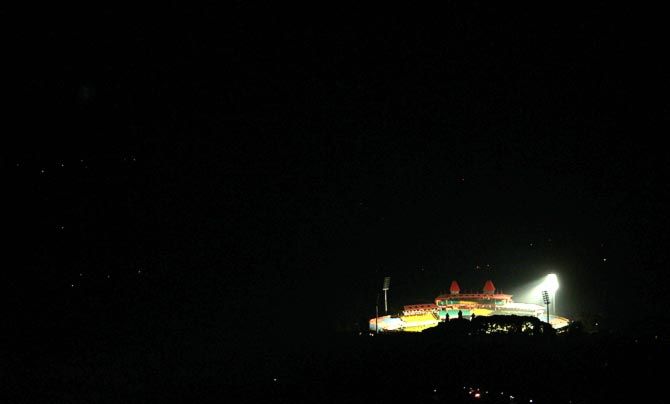 Anyway, it will be a challenge for the Indian bowlers to contain the in-form Dwayne Smith and Marlon Samuels, who have been the stand-out performers with the willow, for the visitors.

While Samuels hit an unbeaten 126 in the first game at Kochi that the West Indies won convincingly, Smith was guilty of throwing his wicket away at the cusp of century (97) in the second game.

Overall, it will be interesting to see how the unpredictable visitors bat on a tricky surface.

On the bowling front, West indies skipper Dwayne Bravo would surely expect his fast bowlers to come to the party. He has the option of bringing in speedster Kemar Roach to support Ravi Rampaul and Jerome Taylor. All-rounder Andre Russell will be expected to keep things tight in the middle overs.