NZ's Nicholls to have concussion checks

IMAGE: New Zealand's Henry Nicholls drops his bat after receiving a blow to the head during Day 2 of the first Test match against England at Bay Oval in Mount Maunganui, Wellington on Friday. Photograph: Phil Walter/Getty Images

New Zealand batsman Henry Nicholls will undergo concussion checks before returning to the crease at Bay Oval on Saturday after he was struck by a Jofra Archer bouncer shortly before stumps on the second day of the first test against England.

Nicholls was immediately checked by medical staff when he was struck by the first ball of the penultimate over on Friday but stayed at the crease to guide New Zealand to 144-4, a first innings deficit of 209 runs.

England had been dismissed for 353 after lunch.

The 28-year-old, who was on 26 at the close with BJ Watling on six, will need to be checked throughout Friday and before play resumes on Saturday, pace bowler Tim Southee said.

"He'll be assessed later on tonight and again in the morning, that's the protocol," said Southee, who sparked an England collapse in the first session and finished with figures of 4-88.

"He's shaping up all right at the moment so fingers crossed he'll be right.

"He's a pretty tough character so he'll rest up tonight, a couple of Panadol and be back out there tomorrow."

New rules allow players to be replaced if they are ruled out of matches due to concussion. During the Ashes in August Australia's Marnus Labuschagne replaced Steve Smith after he was hit by an Archer bouncer.

The hosts had been well placed late on the second day before England's Sam Curran dismissed captain Kane Williamson for 51, reducing New Zealand to 127-4.

"I guess it would have been nice to be three down," Southee said.

"But we've still got some batting to come and hopefully a couple of good partnerships and we can eke out some more runs." 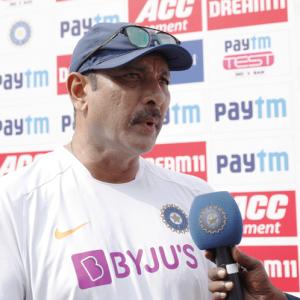