'New Zealand will win the toss and bowl out India cheaply'

'I think New Zealand will play five seamers, and I think they'll win the toss and they'll bowl first.' 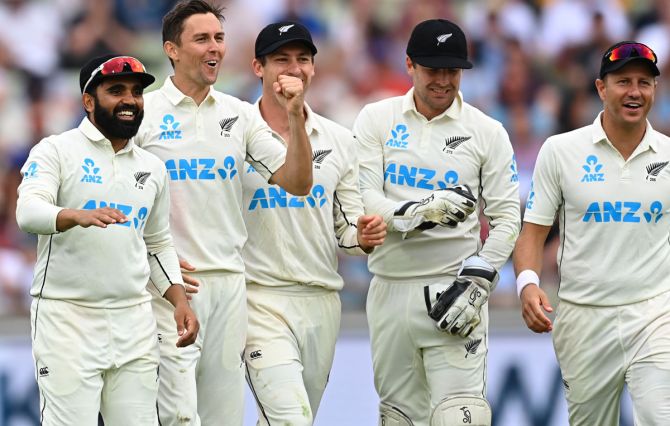 Former pace spearhead Shane Bond on Tuesday backed New Zealand to get the better of India in the ICC World Test Championship final in Southampton, saying he foresees Kane Williamson winning the toss and his pacers wreaking havoc with the new ball.

The much-anticipated WTC final will be played at the Ageas Bowl in Southampton, from June 18.

"I think New Zealand are going to win. Game practices going to have a massive impact. I think in India have got a balanced bowling attack. I think they will play three seamers and two spinners," Bond said.

"I think New Zealand will play five seamers, and I think they will win the toss and they will bowl first," he added.

Bond couldn't really say what India might do if they win the toss but he expects the Kiwis to dominate should Williamson call it correctly.

"...if New Zealand win the toss and bowl as well as they have. I think they will bowl out India cheaply and that ain't a bad thing," Bond said.

"The risk is if they (New Zealand) don't bowl them out, India have got two world class spinners and are right in the game.

Former West Indies pacer Ian Bishop, who was part of the same interaction, feels Kohli would be desperate to get his hands on the coveted trophy.

"It will be huge for Virat. He has led from the front which is one of the important things for a captain. He's a batsman who is at the top of his game along with Kane and a select few," he said.

"He would badly want it. For all the good work that he's done, to have that trophy in the cabinet for himself, his team and country, you can't substitute that," he added.

Bishop feels India have shown that they "can achieve the impossible" with the way they performed in Australia despite being saddled with an injury-ravaged squad.

"After what they accomplished in Australia with all the injuries. They're a team that can achieve the impossible," Bishop said

New Zealand head into the WTC final on the back of a 1-0 series victory over hosts England.