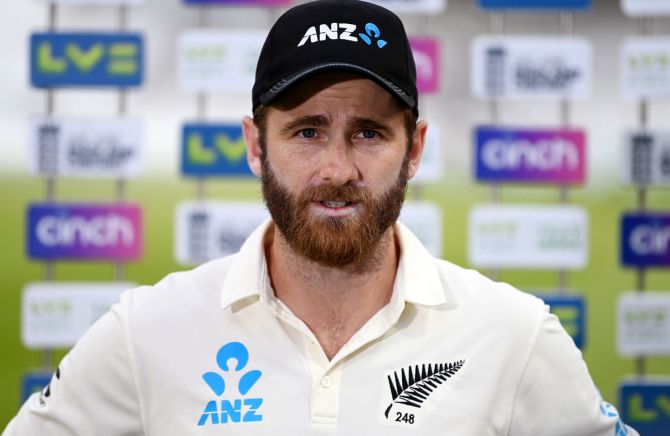 IMAGE: Kane Williamson will be rested for the second Test against England due to a left elbow injury. Photograph: Gareth Copley/Getty Images

New Zealand skipper Kane Williamson will be rested for the second Test against England due to a left elbow injury, with Tom Latham to lead the side in his absence, the team's head coach said on Wednesday.

Gary Stead said Williamson has been managing the injury since March and they wanted to give the 30-year-old a chance to heal before the ICC World Test Championship final against India later this month.

"It's not an easy decision for Kane to have to miss a Test, but we think it's the right one," Stead said.

"He's had an injection in his elbow to relieve the irritation he's been experiencing when he bats and a period of rest and rehabilitation will help maximise his recovery.

"The decision has been made very much with the ICC World Test Championship Final at Southampton in mind and we are confident he will be ready for that match starting on June 18."

Batsman Will Young will take Williamson's spot in the batting lineup.

New Zealand play England in the second test of the two-match series at Edgbaston on Thursday. The first Test at Lord's was drawn.