India recorded their first win against New Zealand in six matches in T20Is. With this victory, India registered wins against every full member team in T20Is. India thrashed New Zealand by 53 runs to give veteran fast bowler Ashish Nehra a winning farewell, in the first Twenty20 International in New Delhi on Wednesday.

Openers Rohit Sharma and Shikhar Dhawan smashed half-centuries to power India to commanding 202 for three before restricting New Zealand to 149 for eight in the series opener.

Left-arm paceman Nehra, 38, ended his international career at his home ground nearly 18 years after his 1999 Test debut against Sri Lanka.

1 Having lost the previous five matches to New Zealand, India recorded their first win against them in six matches in T20Is. With this victory, India registered wins against every full member team in T20Is.

7 Overall, India have recorded seven scores of 200 or more in T20Is. The list includes four such totals in India.

Both Rohit Sharma and Shikhar Dhawan, with 80 each, jointly hold an Indian record for the highest individual innings vs New Zealand in T20Is.

1 Dhawan's first Man of the Match award against New Zealand is his third in T20Is.

12 Rohit Sharma's first fifty against New Zealand is his 12th in ODIs.

158 Rohit Sharma and Shikhar Dhawan were involved in a stand of 158 for the first wicket - India's highest partnership for any wicket in Twenty20 Internationals, eclipsing the 138 for the second wicket between Virat Kohli and  Rohit Sharma against South Africa at Dharamsala on October 2, 2015. India's previous highest opening stand in T20Is was 136 between Gautam Gambhir and Virender Sehwag against England at Durban on September 19, 2007.

Overall, the 158-run stand is the third highest opening partnership in T20Is - the highest being 171 (unbroken) between Martin Guptill and Kane Williamson for New Zealand against Pakistan at Hamilton on January 17, 2016. The aforesaid stand is the highest by any pair for any wicket vs New Zealand in T20Is, eclipsing the 143 (unbroken) for the first wicket between Michael Lumb and Alex Hales for England at Wellington on February 15, 2013.

98 Rohit and Dhawan had played 98 balls during their aforesaid partnership - the highest by any pair and the second highest for any wicket next only to the 99 balls faced by Mahela Jayawardene and Kumar Sangakkara during their stand of 166 for the second wicket for Sri Lanka against West Indies at Bridgetown on May 7, 2010.

3 Rohit Sharma (80) and Shikhar Dhawan (80) have recorded 75-plus - the third instance when both the openers have accomplished the feat in the same innings in T20Is - the first two were South Africa's Graeme Smith (88) and Loots Bosman (94) against England at Centurion on November 15, 2009 and West Indian Johnson Charles (79) and Evin Lewis (100) against India at Lauderhill on August 27, 2016.

0 For the first time, New Zealand could not get a wicket of their opponent in the first ten overs while bowling first in T20Is. Trent Boult (4-0-49-1) has conceded most runs in his four-over spell in T20Is. 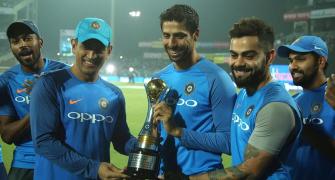 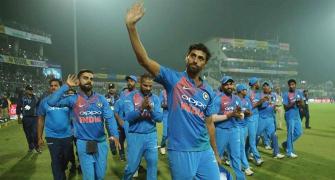 I am not leaving with selectors' permission: Nehra 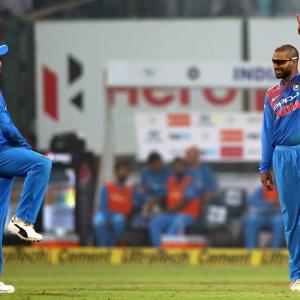