Dinesh Karthik has hit nine half-centuries in 39 innings and all of them have resulted in Indian victories in ODIs. 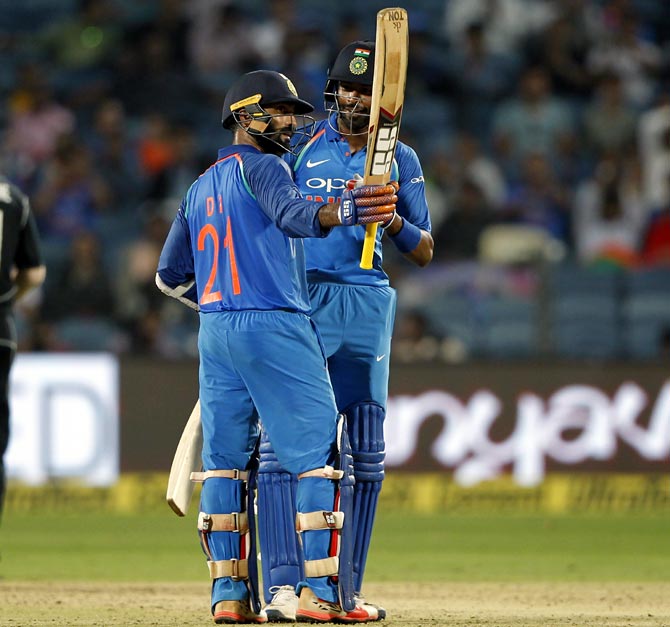 Shikhar Dhawan and Dinesh Karthik hit half-centuries after the pacers had impressed with the ball to help India clinch a series-levelling six-wicket victory against New Zealand in the second One-Day International in Pune on Wednesday.

Opener Dhawan top-scored with 68 and Karthik remained not out on 64 down the order as the hosts reached the 231-run victory target with four overs to spare after Bhuvneshwar Kumar (three for 45) and Jaspreet Bumrah, laid the foundation for their comprehensive victory by restricting New Zealand to 230 for nine after the tourists opted to bat.

This was India's 50 victory in ODIs against New Zealand, against whom they have played 100 matches.

Statistical highlights of the second ODI:

9 Dinesh Karthik has posted his ninth fifty -- 64 not out off 92 balls in Pune. That knock is his second highest in ODIs on Indian soil next only to his career-best 79 vs South Africa at Gwalior on February 24, 2010.

41 In a winning cause, Karthik is averaging 41.24 -- his tally being 1031 in 39 innings, including nine fifties. His all nine fifty-plus innings resulted in Indian victories in ODIs.

1 Shikhar Dhawan's excellent innings of 68 off 84 balls is his first half century in six ODIs vs New Zealand. Overall, the above innings is his 22nd fifty in ODIs.