Not the end of the world if CSK don't make play-offs: Dhoni

'I am not a big fan of maths. Even in school, I wasn't good at it. Thinking of the net run-rate doesn't help. You just want to enjoy the IPL.' 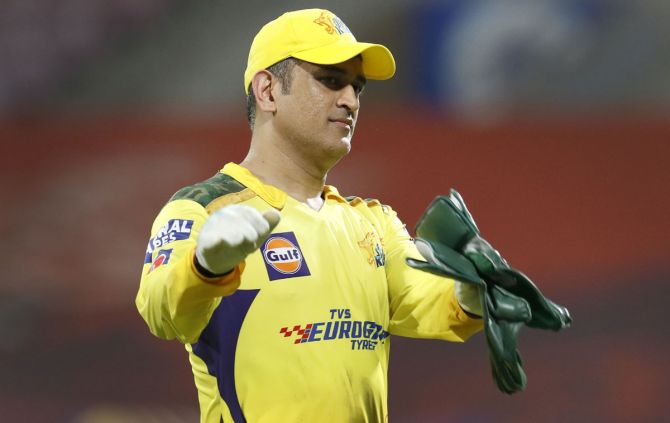 Chennai Super Kings might have had a 'perfect game' against Delhi Capitals but skipper Mahendra Singh Dhoni doesn't want to lose his sleep over qualification for the IPL 2022 play-offs as he feels that even if they fail in that pursuit, it won't be 'end of the world'.

CSK beat Delhi Capitals by 91 runs and moved to the eighth position in the league table. They need to win three games and depend on other results to make it as fourth place entrants in the play-offs.

"If we make the play-offs, great. But even if we don't it's not the end of the world," a pragmatic Dhoni said after the victory against Delhi on Sunday.

"I am not a big fan of maths. Even in school, I wasn't good at it. Thinking of the net run-rate doesn't help. You just want to enjoy the IPL. When two other teams are playing, you don't want to be under pressure and thinking. You just have to think about what to do in the next game," he said.

However, he did admit that the cricket they are playing now could have been played a few game earlier.

"It would have been better if we would have had a win like this somewhere early. It was a perfect game."

Rishabh Pant had no hesitation in admitting that his team was outplayed in every department of the game but it was good to get such a one-sided defeat out of the way.

"I think they outplayed us in all departments. As Delhi Capitals, we have played a lot of close games, there had to be a game where there is a massive difference between the two sides and unfortunately we are on the receiving end," he said.

Pant said that the equation is simple for Delhi Capitals from hereon as they must win three games and not depend on any other result to qualify.

"The only thing we can look forward to is the next three matches, if we win them then we will qualify."

With a net bowler being found COVID-19 positive and opener Prithvi Shaw in the hospital, Pant agreed that a lot of off-the-field incidents were happening but at the same time wouldn't like to use them as an excuse.

"There is a fair bit going on amongst us, especially COVID-19 and we had few stomach infections, but we are not making an excuse and we just want to keep improving.

"Right now, we can be more positive and that's what we are going to be talking about to the boys, let's be more proactive and let's be in a good frame of mind to make good decisions in the next few matches," he said.