The ODI and T20 series against the Aussies begins on Sunday, September 17.
Srinivas Bhogle and Purnendu Maji check out how Team India fared on the Sri Lanka tour and find out which cricketers were truly valuable to the team. 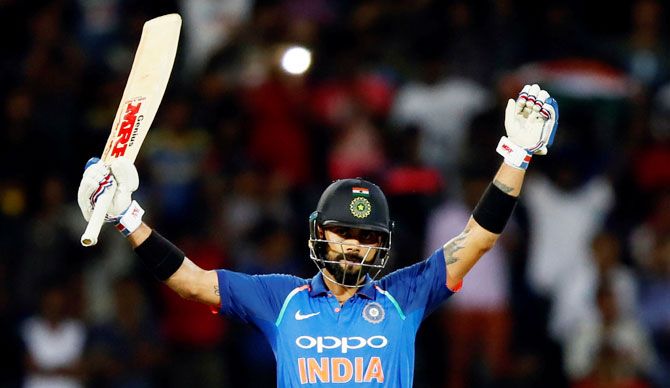 Virat Kohli being the most valuable player on the Sri Lanka ODI series (with an MVPI of 447) is hardly a surprise.

He's really that good, and he's in that sort of form.

But look who's just behind him? Jasprit Bumrah with an MVPI of 440!

What's especially notable is that Bumrah didn't score a single run (he wasn't required to); he's up there because of some exceptional bowling with 15 wickets at an economy rate below 4 runs per over.

He nearly won the second ODI for Sri Lanka with an incredible bowling spell, but the old warrior M S Dhoni inspired Bhuvneshwar Kumar to bat with care and diligence to eventually lead India to a good victory.

Table 1 provides all the details.

Table 2, below, contains some interesting pointers.

Kohli is India's best batsman this season with 832 runs so far, with Rohit Sharma (606) and Shikhar Dhawan (689) easily being the second and third best batsmen respectively.

We then have Dhoni (383) scoring his bit when required and Ajinkya Rahane (341) riding his exceptional success in the West Indies.

No other batsman has scored -- or been required to score -- but Kedar Jadhav could just be trailing off. He needs a strong comeback at home.

The story of Indian bowlers is more reassuring, with Jasprit Bumrah (19), Bhuvneshwar Kumar (14) and Hardik Pandya (14) being the leading wicket-takers.

These numbers suggest that Pandya may be more a bowling all-rounder, but his strike rate of almost 150 (that too in ODIs!) does point to a truly explosive finisher.

The concern could be R Ashwin. He hasn't played enough (just 6/15 matches this season) and he hasn't taken enough wickets.

Is he being held back only for Tests? Is that wise?

Does anyone remember that he first came in essentially as a limited overs bowler?

Table 2 summarises the performance so far of India's ODI players in the 2017-2018 season.

It'll be interesting to see how these numbers change after playing Australia and New Zealand at home.