IMAGE: Bowling spearhead Trent Boult broke his hand in the second Test against Australia in Melbourne forcing him to miss the Twenty20 and One-Day International series against India. Photograph: Mike Owen/Getty Images

Injured New Zealand pace bowlers Trent Boult and Lockie Ferguson are "tracking nicely" as the side begin their preparations for the Test series against India, according to captain Kane Williamson.

Bowling spearhead Boult broke his hand in the second game against Australia in Melbourne while Ferguson bowled just 11 overs in his Test debut in the first match in Perth before breaking down with a calf strain.

Both missed the Twenty20 and One-Day International series against India but Williamson said there are hopes they could be available for the first match against the world's top ranked Test team that starts on February 21 in Wellington.

"They're tracking nicely," Williamson said after his side sealed a five-wicket win and 3-0 series sweep of the One-Dayers against India at Bay Oval in Mt. Maunganui.

"It's an exciting opportunity ... against one of the best sides in the world."

The injuries to Boult and Ferguson and regular squad member Matt Henry, who broke his thumb in the third Test in Sydney, forced New Zealand to test the depth of their pace bowling stocks against India.

Hamish Bennett was recalled after almost three years in the international wilderness, while Kyle Jamieson, who was brought into the Test squad in Australia as cover but did not play, made his debut in the one-day series.

Bennett took the most wickets for New Zealand in the one-dayers and was joint top wicket taker in the Twenty20 matches with leg-spinner Ish Sodhi.

While expensive in his opening spells, Bennett proved to be a solid death bowler with his ability to mix his pace and length, something noted by Williamson.

"We were put under pressure by India, but we were able to have a really good death phase, which helped us keep India to about a par total," he said.

"A lot of positives in different areas, so it's an opportunity to build on this series and keep moving forward as an ODI side."

The 2.03m-tall Jamieson, however, could have been the best find for the hosts after he was the most economical New Zealand bowler in the ODIs and presented some difficulties with his ability to get the ball to move and lift off a length.

He also showed he was a more than capable lower-order batsman when he scored 25 not out and shared a 76-run stand with Ross Taylor that helped New Zealand post a winning total in the second match in Auckland.

"To get the opportunity to bowl with the new ball and bowl really nicely ... he's an exciting prospect.

"Coming in with that height does bring a point of difference, a great attacking weapon." 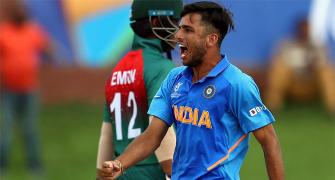