Effusive in his praise for Ravinchandran Ashwin, Indian captain Virat Kohli on Monday said the off-spinner is a "priceless" cricketer to have in the team having contributed with both bat and ball in the massive win over New Zealand in the opening Test in Kanpur.

Ashwin took 10 wickets and also scored a 40-run cameo in the Indian first innings, playing a crucial role in the 197-run win in the match.

"He's been outstanding for the Indian team. If you see all the impact players in the world, he comes in the top three-four easily. There are quite a few players making big impact for their respective sides, especially bowlers. Bowlers are the one I feel that win you Test matches and Ashwin is one of them," Kohli said after India's big win.

"There's no doubt that he has been bowling wonderfully well for the last couple of years. He works very hard on his game. He is a very keen thinker of the game. He understands the game very well.

"Very smart cricketer, very intelligent. That shows in his batting as well. He understands the situation and plays accordingly. He knows when to get runs and when to play out the situation accordingly. So, it's priceless to have a cricketer like Ashwin in your Test team," the Indian captain said. Kohli also spoke on how both Ashwin and Ravindra Jadeja, who shared 16 of the 20 Kiwi wickets in the match, take the lead when things do not pan out as planned.

"I like the fact that both of them, at times when they feel like we are trying too much as a team, both of them can come back to you and say that 'I'm trying to bowl to this one plan and let's see how that goes'.

"As a captain it always gives you more assurance that both these guys obviously know what they are doing and they are going to pitch the ball in the right areas. Both of them are pretty open to hearing suggestions, but when they feel like they are very convinced about what they want to do, they tell you that. And, I personally like that as a captain as well," he said.

Kohli was also pleased with Cheteshwar Pujara scoring at a brisk pace. Pujara has been criticised for a below average show at number three in the previous West Indies tour.

"He is someone who absorbs the pressure really well but after a certain stage in the innings there comes a time when the team needs runs. That's where we felt that he has the ability to capitalise. It was just about conveying that to him. He has worked hard on his game. IMAGE: India's Cheteshwar Pujara plays a shot on Day 1 of the first Test against New Zealand in Kanpur on Thursday. Photograph: Danish Siddiqui/Reuters

"He scored at a good strike rate in the Duleep Trophy. Even on this wicket he was scoring at 65, almost 70 strike rate, which for me was a revelation."

"If you see his double hundreds against England and Australia, he will dominate spinners. That's exactly what we wanted him (Pujara) to do. We didn't want him to go into a shell. We want Pujara to bat to his potential. Once he starts scoring runs to go with the composure he already has, it becomes very difficult for the opposition to have control of the game," Kohli added.

Talking about the morning session, Kohli said they were not overtly worried despite Luke Ronchi and Mitchell Santner going very strong.

"It wasn't much of a concern because the reason we scored the extra 30-40 runs was because we could bat them out of the game. That's exactly what we planned to do. A target of 430 on the fifth day wicket -- fourth day one session and a fifth day wicket -- is very, very hard to get. All your batsmen right till No 10 have to bat really, really well. So we knew that it was a matter of being patient. It's a good lesson for us, good learning," he said. "The only thing we collectively decided was that we will take a learning out of this. There will be runs scored, there will be partnerships but its how we come back that will define our character. So going through a difficult situation is very important for us to become better players. What I've learnt in few matches that I have been captain is that you have to have patience. If you get over-excited or keep on bowling in one mould then the game can quickly slip away."

Kohli also spoke of having a psychological advantage over New Zealand now.

"Whoever has the first advantage over the other team, they will go into the second Test feeling more confident for sure. But it doesn't mean that you can take things for granted, because we know that we're playing a quality side.

"For them to show the resilience and the character that they did over the five days of this game, we know that we cannot afford to be relaxed at any stage. We got relaxed in phases in this game and they capitalised you know, they were on the mark throughout the game." 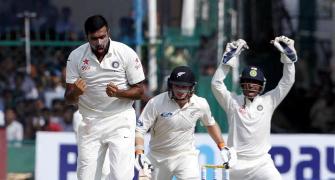 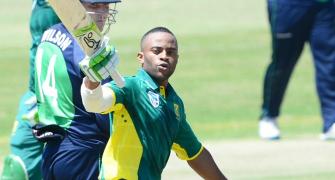 Century on debut for Bavuma as SA thrash Ireland