'Need to prove to myself, not to the world, that I can play ODIs' 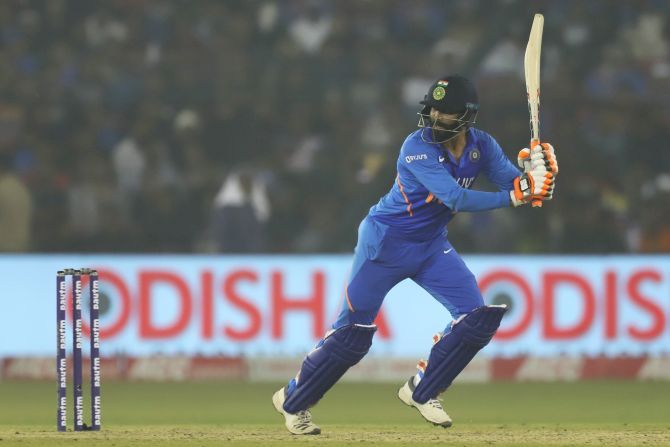 IMAGE: Ravindra Jadeja struck 39 off 31 balls to take India across the finish line in Cuttack on Sunday. Photograph: BCCI

The unbeaten 39 in a high-scoring series-decider earned him plaudits but for India all-rounder Ravindra Jadeja, it was more about proving a point to himself rather than the world that he is still a good enough player in the limited-overs format.

Jadeja wasn't a regular part of the white-ball set-up but came into the scheme of things closer to the ODI World Cup in England.

After former India cricketer-turned-commentator Sanjay Manjrekar termed him a "bits and pieces" player he nearly pulled it off for India in the World Cup semi-final against New Zealand with a brilliant 77 off 59 balls.

"It was a very crucial innings as it came in a series-decider. The wicket was so good to bat on, we could just play with singles. We just needed to play according to the merit of the ball.

"I didn't play too much ODI cricket (this year). I tried and gave my best, be it in bowling, batting or fielding, whenever I got an opportunity," Jadeja, who played 15 of India's 28 ODI matches this year, said after their win at Barabati Stadium on Sunday.

The flat Barabati wicket had little to offer for the bowlers and the message from his skipper after he got out was clear -- not to do anything silly with 30 needed from 21 balls.

"Virat and I were going well in the middle and the wicket was good to bat. He said he would look to finish the chase but unfortunately, he got out. Then he (Kohli) told me to play normal cricketing shots and not to do something silly, just try to play straight, in the V."

It was Shradul Thakur, who played the role of the finisher smashing two fours and one six in his six-ball 17 not out to seal the chase with eight balls to spare.

"It was about playing till the last ball and we knew we would win. That was the plan, basically."

Rohit Sharma and KL Rahul once again gave India a solid foundation in a 122-run opening partnership but the middle order looked shaky once again.

"It happens sometimes in ODI cricket. At times, you start thinking too much and we lost three quick wickets in the middle. But we knew wicket was so good to bat on that if we played till the last ball, we could chase it down."

Jadeja further conceded that they have to work on their fielding as they dropped a lot of catches during the series.

"A lot of catches were dropped in the entire series. Going by our fielding standards, it should not have happened. Under lights and if you have dew, it becomes a problem and in limited overs, dropped catches can cost you the match.

"It's a young group and in the next series we will concentrate on catching," he concluded.

BCCI president Sourav Ganguly says Ravindra Jadeja's improved batting will be very important for the Indian team going into the future after the all-rounder played a crucial cameo in the third ODI against the West Indies in Cuttack.

Jadeja, who has already hit 11 half-centuries in ODIs, held his nerves to remain unbeaten on 39 off 31 balls in a high-scoring chase against West Indies in the series decider on Sunday night.

"Another win @bcci...congratulations..good performances with the bat in a pressure game..jadeja s improvement with the bat so important ..." Ganguly tweeted.

Ganguly's satisfaction is understandable as Jadeja, at the start of his career, was panned for not being able to hit big shots in the death overs.

However, things have changed in the past few years and he has now scored more than 2000 runs in ODIs (2188 to be precise) and 1844 in Test matches.

In all, he has 25 half-centuries (14 in Tests and 11 in ODIs) along with a hundred in the longest format.