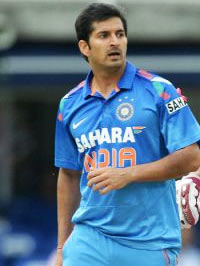 Splendid bowling by Stuart Binny and Mohit Sharma helped India beat Bangladesh by 47 runs via the Duckworth-Lewis method, in a rain-curtailed second One-day International, and take an unassailable 2-0 lead in the three-match series, in Mirpur, on Tuesday.

Sent in to bat, India were shot out for a paltry 105 in the rain-truncated 41 overs-a-side game, before the pace combination of Binny (6-4) and Mohit (4-22) saved the team from humiliation by bundling out the hosts for 58 in 17.4 overs.

In the process, the Indians defended their lowest total against Bangladesh.

But if India's 105 was way below their previous low of 191 at Port of Spain during the 2007 World Cup, then Bangladesh also sank deeper, way below their lowest against the Men in Blue, 76 in 2003 at Dhaka.

Binny’s figures are best by any Indian bowler in ODIs, bettering Anil Kumble's 6-12 against the West Indies in 1993. He was ably supported by medium pacer Mohit from the other end.

The proud owner of the 'Purple Cap' in the recently-concluded Indian Premier League for Chennai Super Kings, Mohit started the demolition of Bangladesh, dismissing openers Tamim Iqbal for 4 and Anamul Haque for nought.

Binny soon joined in the act and sent back innings top-scorer Mithun Ali for 26 and skipper Mushfiqur Rahim for 11.

The rest of the batting fell like a deck of cards as Binny and Mohit had little time to celebrate between the fall of wickets.

Earlier, the stunning Indian collapse was triggered by Taskin, who returned figures of 5-28, making it the best debut bowling performance by a Bangladesh player.

Skipper Suresh Raina's 23-ball 27, laced with three fours, was the best an Indian batsman could manage under overcast conditions.

India lost Ajinkya Rahane for nought to Mashrafe Mortaza, but rain soon halted play after 5.1 overs. The resumption after three hours did not help matters for the visitors as Robin Uthappa (14) top-edged a skier to give Taskin, 19, his debut wicket in overcast conditions.

The lanky pacer continued to trouble the inexperienced Indian batsmen in conditions conducive to swing bowling and Cheteshwar Pujara (11) and Ambati Rayudu (1) were trapped leg before.

Raina tried to counter-attack with three boundaries but was run-out to an Al-Amin Hossain-Mortaza combination.

Wicketkeeper-batsman Wriddhiman Saha (5) was soon trapped leg before off Mortaza and Akshar Patel was cleaned up by Al-Amin as India looked straight down the barrel.

All-rounder Binny (3) was caught behind chasing a wide delivery from Taskin and the procession back to the pavilion continued as Amit Mishra was trapped leg before as Taskin's joy knew no bounds after he picked up his fifth wicket and became the eighth bowler in the history of ODIs to bag a fifer in his maiden match.

The previous best by a Bangladeshi was achieved by Sohag Gazi and Rubel Hossain, both of whom scalped four wickets on debut.

India laboured to cross the three figure mark before the formalities were completed when Shakib Al Hasan scalped Umesh Yadav (17).

In fact, had it not been for the 13-ball cameo by Yadav, India could well have folded inside the 100-run mark.

The final match of the series is slated for June 18 at the same venue.