'I am not expecting a hat trick (again at The Oval), but expecting little bit of spin towards the end. It does look a bit more green than what you normally see here.' 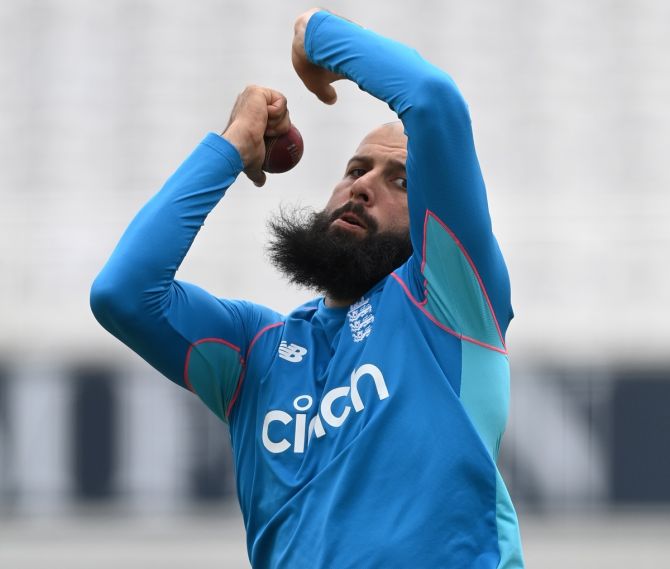 IMAGE: England all-rounder Moeen Ali bowls during a nets session at The Kia Oval ahead of the fourth Test against India. Photograph: Gareth Copley/Getty Images

Moeen Ali is a "little" surprised that Ravichandran Ashwin is yet to feature in the ongoing Test series, but says if India does persist with the one specialist spinner strategy, his pick would be the "amazing" Ravindra Jadeja.

Jadeja has been preferred over Ashwin so far because of his batting, but that could change at The Oval on Thursday.

"Yeah a little bit (surprised over Ashwin not playing), but I also feel Jadeja is an amazing cricketer. He is one of my favourite characters in the world," said Moeen, ahead of the fourth Test, beginning Thursday.

"I would always have Jadeja in my team and I think India, after winning at Lord's would have gone with four seamers (at Headingley) and Jadeja did a great job. He is batting really well. I am sure Ashwin has been considered and will be considered for tomorrow."

Moeen, who has been named England vice-captain in the absence of Ben Stokes and Jos Buttler, expects the pitch to turn a bit later in the game. The all-rounder has taken a hat-trick at The Oval, against South Africa in 2017.

"Most grounds in England tend to spin a little bit anyway; some obviously more than others, but there's always a bit of spin.

"I am not expecting a hat trick (again at The Oval), but expecting little bit of spin towards the end. It does look a bit more green than what you normally see here. It's always a good wicket for batting and bowling and towards the end of the game the spinners (get into the game)," added the England off-spinner.

The Lord's Test against India earlier this month was Moeen's first at home in two years. He has been in and out of the team, but England making him vice-captain even for one game shows that he is now part of the leadership group.

He, however, does not think he has cemented his place in the side yet and says his appointment as vice-captain is a huge honour.

"Yeah, sounds amazing. To captain or vice-captain England in any form is huge, and I'm just very excited. I'm obviously not hoping for Joe (Root) to go off the field, but if he does go off I'm looking forward to the role.

"I think that's the beauty of sport in one way, but also I know that obviously Ben and Jos are not here. I am pretty realistic in terms of that. But, yeah, things can change quickly and to be given the role I think is great."

He hopes to inspire more people from the British Asian community to play the game.

"Whenever you are playing for England you are representing your people. For me, for example, I feel like I'm representing them and to be given the chance, I feel maybe they'll be also be thinking about cricket. You know, chances are good if you do the right things and you're showing the right attitude towards the game."

Moeen also expressed the desire to travel for the Ashes Down Under if the big series does go ahead in COVID-19 times later this year.

"I want to cement my spot in the team. Having a couple of games under my belt I feel I have found the rhythm of the game.

"Looking forward to the next two games against India to put in some performances to keep my spot in the team and then Australia.

"A lot more information is needed for players and families to think about going ahead. If the tour takes place I am quite keen to go and cement my place."

Moeen feels England was able to win at Headingley and level the series because the players remained focussed on the job and didn't engage in too many verbal battles with the opposition, like they did at Lord's.

“Expecting India to come up with the intensity they have shown thus far. We had a great first day at Headingley and for the rest of the match we played really well. Just think were really focused last game and concentrated on our own performances.

"The one thing we are really good at as a team, I think, is coming back from behind. Now going forward is really about putting in the performance that can take us ahead. We're quite confident, and in particular against India, having done so in 2014, I think," he added.