Mithali Raj held on to the top spot in the batting list, while Jhulan Goswami was the best-placed Indian in the bowling chart after climbing a spot to third in the latest ICC ODI rankings for women cricketers.

Mithali is the only Indian in the top-10 of batting after Harpreet Kaur slipped four rungs to 11th in the list. 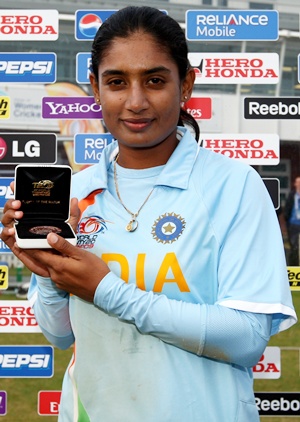 Among the bowlers, Gauhar Sultana is giving company to Jhulan in the top-10, rising one position to eighth.

Amita Sharma is the highest-ranked player in the all-rounders', steady at the seventh spot.

Australia's Meg Lanning has been rewarded for her record-breaking efforts with the bat in the Rose Bowl series against New Zealand with a jump of four places to sixth position in the rankings for batters.

The 20-year-old Lanning also achieved a career-best rating of 635 points.

Lanning was the top run-getter on either side with 300 runs at an average of 75 with a strike-rate of 143.54. In the third ODI of the series, Lanning broke two Australia records. She hit the fastest half-century off 23 balls and the fastest hundred, breaking Karen Rolton's Australia record of scoring an ODI century off 57 balls in 2000.

Australia won the four-match series by a margin of 3-1.