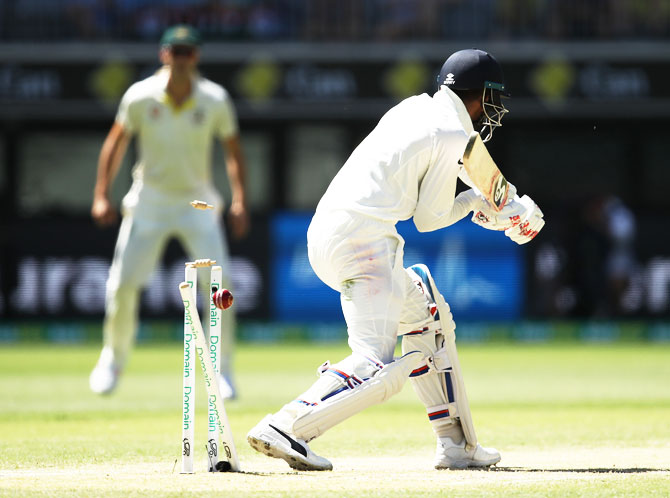 IMAGE: KL Rahul is bowled by Mitchell Starc in the 2nd innings of the Perth Test. Photograph: Ryan Pierse/Getty Images

Captain Virat Kohli has thrown his weight behind India's struggling openers but the tourists' defeat in Perth showed they have yet to find a solution to their top order woes.

Lokesh Rahul and Murali Vijay have managed only one double-digit stand midway through the four-Test series in Australia, hardly the starts that would help bring India a first Test series win Down Under.

Their struggles have intensified pressure on the middle order of a team with a lengthy tail, and number three Cheteshwar Pujara has had to walk out to bat inside four overs on three of the four occasions.

Opening stands made telling difference in Perth, where Australia prevailed by 146 runs to square the four-Test series.

The 112-run first innings stand between Marcus Harris and Aaron Finch laid the platform for Australia's 300-plus total in a low-scoring contest and they raised 59 in the second to help set India a target which the tourists could not achieve.

Rahul, who has managed 48 in four innings, has looked like a sitting duck, with batting great Sunil Gavaskar demanding the 26-year-old be sent home to work on his game.

"I think he should come back and play Ranji Trophy for Karnataka," the former India captain told Aaj Tak channel.

"It is not just that he is out of form, he is just not there and you can see that."

Rahul has not managed a fifty in his last seven Test outings and equally worrying has been the manner of his dismissals, with the right hander either bowled or trapped LBW in 11 of his last 14 innings.

India batting coach Sanjay Bangar lamented last month that the opener was 'finding new ways to get out' and many believe Rahul needs to work out the flaws with his technique.

Opening partner Vijay has not covered himself in glory either on his return to the squad after he and fellow opener Shikhar Dhawan were dropped following modest returns in England.

Vijay has managed 49 runs from four innings but may still continue as opener purely because India have lost the exciting Prithvi Shaw to an ankle injury for the entire series.

"I'm sure those guys have figured out what's gone wrong in this game especially and they're very keen to correct it themselves," Kohli said in Perth of his misfiring openers.

The tourists have flown in Mayank Agarwal as replacement, rewarding the uncapped opener for his consistency in domestic cricket.

The series shifts to the traditional Boxing Day Test in Melbourne followed by the finale in Sydney. 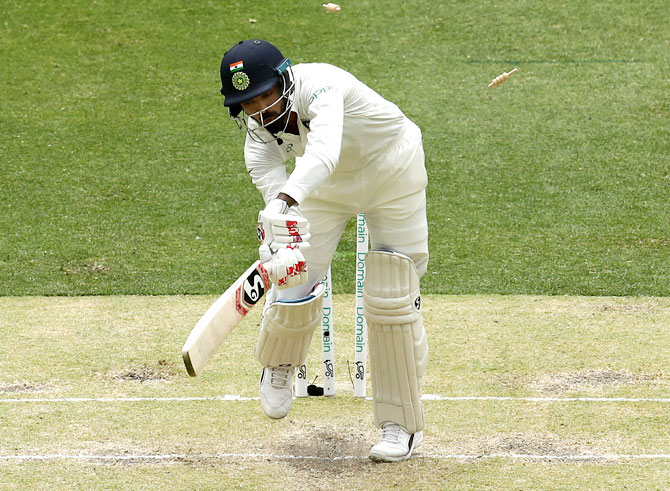