Mendis included in SL squad for first Test against Pak 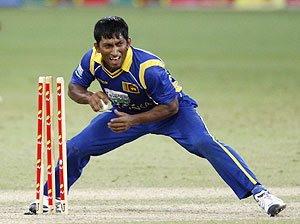 The 29-year-old Mendis has appeared in 20 ODIs and Twenty20 games but is unlikely to make the final XI as the spin department appear to be firmly booked by Rangana Herath and Suraj Randiv.

Thisara Perera, after his heroics in the One-day series where he became the fourth Sri Lankan bowler to achieve an ODI hat-trick, may still find himself left out of the final XI .

The first Test starts in the southern port town of Galle on June 22.

© Copyright 2022 Reuters Limited. All rights reserved. Republication or redistribution of Reuters content, including by framing or similar means, is expressly prohibited without the prior written consent of Reuters. Reuters shall not be liable for any errors or delays in the content, or for any actions taken in reliance thereon.
Related News: Jeevan Mendis, Suraj Randiv, Thisara Perera, Rangana Herath, Kumar Sangakkara
COMMENT
Print this article
Analysis: The hits and flops of IPL 5
Fifth ODI: Mathews stays cool to steer Sri Lanka home
Perera and Dilshan help Sri Lanka sink Pakistan