Michael Clarke struck a sublime century to become his country's highest Test run-scorer in a calendar year as Australia marched to an imperious 278-run lead at the close of day two of the second Test against Sri Lanka on Thursday.

The Australia skipper, enjoying an inspirational 2012, surpassed the 1,544 runs Ricky Ponting amassed in 2005 during his innings of 106, before tail-ender Mitchell Johnson rubbed salt into Sri Lanka's wounds with an unbeaten 73.

Nathan Lyon, yet to score, strode off with Johnson, with Australia having added 108 runs in the session after tea to drive their total to an imposing 440-8 at the Melbourne Cricket Ground.

Sri Lanka, skittled for 156 on day one, had only a six-run lead to protect at the start of the day's play and their hopes of restricting the hosts diminished with a hamstring injury to seamer Chanaka Welegedera in the morning session.

The remaining bowlers had little assistance from a flattening pitch on a gusty day and were put to the sword by Clarke and Shane Watson, who composed a record-breaking fourth-wicket stand of 194 against Sri Lanka at the MCG. 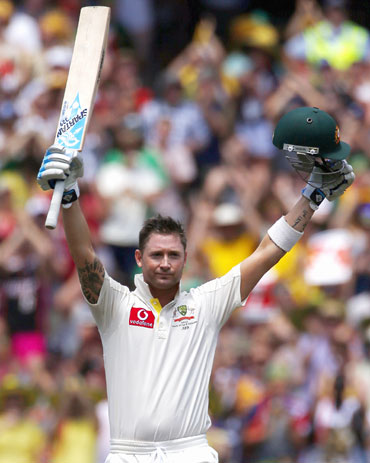 The 31-year-old's dismissal, slashing a Shaminda Eranga delivery to his counterpart Mahela Jayawardene in the slips, broke his perfect record of scoring at least a double-century once he surpassed 100 in 2012.

It also sparked a mini-collapse as Watson (83) and Matthew Wade (1) fell in quick succession to ill-conceived hook-shots, both caught in the deep before tea.

Watson's half-century was his first in eight innings and a welcome return to form, but the barrel-chested all-rounder will rue another lost chance to score his third Test century.

The quick wickets gave Sri Lanka faint hope of saving the match but they were plunged back into the mire with a defiant seventh wicket stand of 61 from middle order batsman Mike Hussey and Johnson.

Hussey was caught for 34 shortly before the drinks break, with a mis-timed slog to long on off the bowling of part-time spinner Tillakaratne Dilshan.

Pint-sized spinner Rangana Herath put in a bid for catch-of-the-year as he scampered to his left and plucked an extraordinary, lunging catch with the thumb and forefinger on his left hand to draw kowtows from the crowd.

Johnson, who led Australia's first innings bowling with a four-wicket haul, marched on with seamer Peter Siddle and raised his seventh half-century with a push to mid-on for two.

Siddle was removed for 13 with a blinding catch to Jayawardene in the slips to give Eranga a second wicket.

It was again a day of lost opportunities for Sri Lanka, however, who dropped both Clarke and Watson late on day two.

Clarke survived another life three overs before lunch when on 58, when Jayawardene spilled a sharp chance in the slips from spinner Rangana Herath.

Mike Hussey also had a life on seven when he was dropped by replacement wicketkeeper Kumar Sangakkara.

Sri Lanka were already a man down before Welegedara's injury, with wicketkeeper Prasanna Jayawardene suffering a broken thumb on day one.