Meet Dhoni's super fan who wants '183 autographs' from his idol 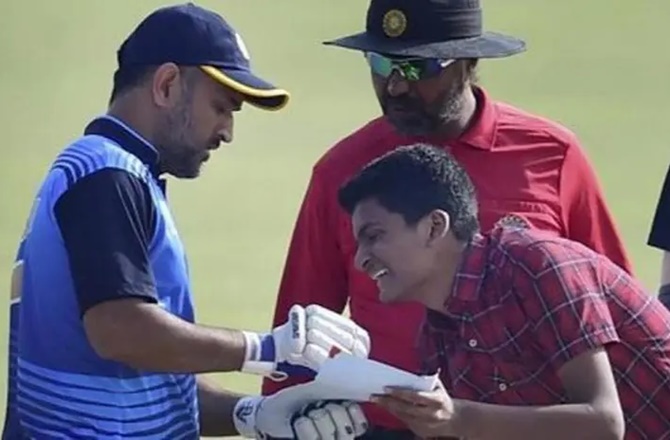 IMAGE: Pranav Jain, who is a die-hard fan of Mahendra Singh Dhoni wants 183 autographs from his idol. Photograph:PTI

There's a certain amount of intrigue associated with 183 in Indian cricket and die-hard fans have their own reasons for remembering the number.

For most, it is the score India defended against the mighty West Indies at the 1983 World Cup, for some it is Sourav Ganguly's epic World Cup knock at Taunton.

But for a millenial like Pranav Jain of Bengaluru, 183 means Mahendra Singh Dhoni's career-best ODI score and the 22-year-old's 'mission' is to get 183 autographs of India's most decorated cricket captain and by the time he landed in Kolkata, he already had 153 in his kitty.

"Mahi bhai has promised me 183 autographs but with a rider. He has told me "Jis din tera 183 complete hoga, tujhe ur koi autograph nahi milega". I am planning to get 10 autographs today and it will be 163," Jain, who is set to join his family business, said while waiting for Dhoni to complete his shoot at a Kolkata resort.

Jain, whose formative years were all about 'Captain Cool', has in fact travelled across the globe to collect his icon's autograph on gloves, bats, posters, sketches, whatever he could lay his hands on.
It has become an obsession now and Jain expects in another year or so, his "mission" will be accomplished.

Dhoni was in the city for a commercial shoot with another World Cup winning captain Kapil Dev.

Kapil has been in the city since Monday and was chief guest at an event in Ballygunge Shiksha Sadan (BSS) girls school.