Captain Brendon McCullum's blazing century gave New Zealand a brisk start on the second day of the third and final Test against Pakistan in Sharjah as the death of Australian Phillip Hughes continued to cast a gloomy shadow over the match.

The 33-year-old right-hander (153 not out) completed his 10th Test century, which came off 78 balls, as New Zealand reached 249 for one at close, replying to Pakistan's first-innings total of 351.

In the morning, Pakistan, leading the series 1-0, appeared distracted by the death of Hughes and lost their last seven wickets for 66 runs as off-spinner Mark Craig (7-94) completed his first five-wicket haul in Tests.

The 25-year-old Hughes was struck on the head by a bouncer during a domestic match on Tuesday and passed away after two days in a Sydney hospital from the injury which caused massive bleeding to his brain. Players of New Zealand line up before the start of play to observe a minute's silence in memory of Australian cricketer Phillip Hughes. Photograph: Francois Nel/Getty Images

The second day's play was called off and the match resumed on Friday in a sombre atmosphere with players and officials observing a minute's silence as a mark of respect for Hughes.

The death was on everyone's mind as the cricketers seemed to be going through the motions with barely a hint of celebration when wickets fell or when McCullum reached his ton from the last ball before tea.

Both sets of players, all wearing black armbands, placed their bats outside the dressing-rooms with caps resting on the handles to reciprocate a global social media trend '#putoutyourbats' in memory of Hughes.

The New Zealand team were also playing with the initials 'PH' written below the silver fern crest on their shirts. Mohammad Hafeez of Pakistan leaves the field after being dismissed by Ish Sodhi of New Zealand during Day 2 of the third Test against New Zealand at Sharjah Stadium. Photograph: Francois Nel/Getty Images

Pakistan's Mohammad Hafeez (197), who was unbeaten on 178 overnight, again fell agonisingly short of his maiden double hundred as he holed out in the deep trying to hit spinner Ish Sodhi out of the ground to get past the mark.

The 34-year-old right-hander, whose previous highest score in Tests was 196, hit 25 boundaries and three sixes during his 316-ball knock.

McCullum, who struck 17 fours and eight sixes, helped lift the mood in the afternoon by smashing the bowlers to all parts of the ground.

He added 51 with opener Tom Latham (13) and 198 in an unbroken second-wicket stand with Kane Williamson who hit seven boundaries and a six in his unbeaten 76.

© Copyright 2021 Reuters Limited. All rights reserved. Republication or redistribution of Reuters content, including by framing or similar means, is expressly prohibited without the prior written consent of Reuters. Reuters shall not be liable for any errors or delays in the content, or for any actions taken in reliance thereon.
Related News: Phillip Hughes, New Zealand, Brendon McCullum, Pakistan, Sharjah Stadium
COMMENT
Print this article 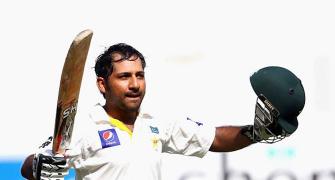 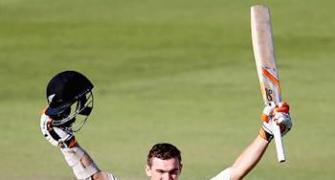 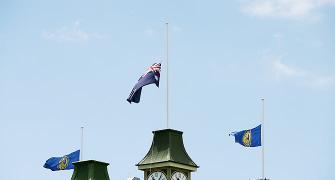 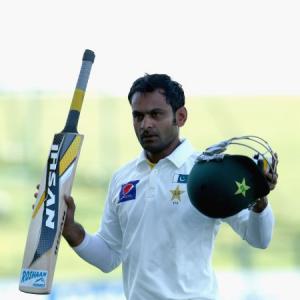 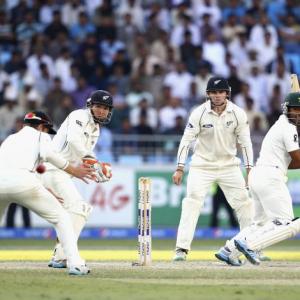