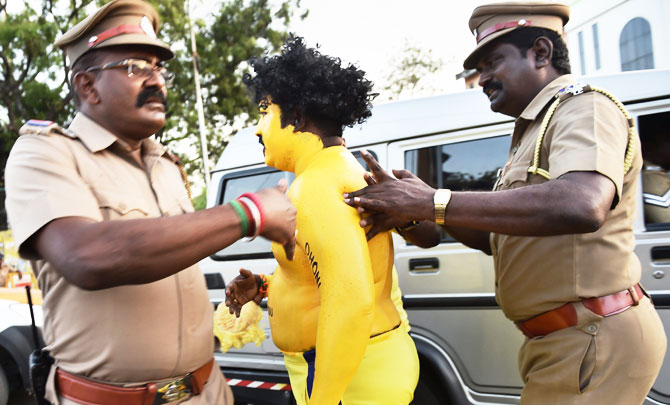 Massive anti-IPL protests by pro-Tamil groups erupted in Chennai on Tuesday with scores of activists including film directors being detained even as police chased away agitators in some places.

One incident of protesters burning yellow jerseys, the attire of Chennai Super Kings players, was witnessed.

Two activists belonging to a pro-Tamil outfit threw slippers into the ground when the Chennai Super Kings-Kolkata Knight Riders match was in progress at the M A Chidambaram Stadium, police said.

However, the match went on and the activists belonging to Naam Tamizhar, detained.

The slippers fell near CSK fielder Ravindra Jadeja who was fielding at long-on.

The incident occurred when the eighth over was in progress with the Kolkata Knight Riders batting.

Pro-Tamil groups like Tamizhaga Vazhvurimai Katchi (TVK) and a newly launched forum of Tamil directors had given a boycott call of the popular Indian Premier League.

They alleged that the game was being organised to divert attention from the raging Cauvery protests across the state.

Naam Tamizhar leader and film personality Seeman, film-maker Bharathirajaa and scores of activists were taken into custody by police, who had a tough time managing the surging number of protesters.

Bharathirajaa said that "at a time when we are grieving (over the Cauvery dispute), should we need IPL... it is insulting," he added.

In some places, the agitators clashed with police, even as there were reports of police chasing them away.

Police had brought the M A Chidambaram stadium under tight security cover with 4000 police personnel guarding the venue, hosting its first IPL tie since May 2015.

Commandos and personnel of Rapid Action Force were among the security detail.

The threat of more protests prompted police to step up security for the cricketers, including during their journey to the stadium from their hotel.

The CSK team suffered a slight delay on its onward trip to the stadium for the match due to the disruption.

Some protesters at Anna Salao were seen raising slogans against Prime Minister Narendra Modi for not establishing the Cauvery Management Board, an issue on which Tamil Nadu political parties including DMK and other outfits have been agitating for the past one week.

Protests were also held at Triplicane, in the vicinity of the stadium, by some outfits including VCK but police foiled their bid to march towards the venue and detained them.

Earlier in the day, activists of TVK who tried to stage a demonstration outside the stadium were held.

Tamil Nadu has been witnessing protests for the past one week, urging the Centre to constitute the Cauvery Management Board (CMB).

Various political parties and outfits have demanded cancellation of IPL matches in Chennai, saying it was being held at a time when the state was witnessing widespread agitations on the vexed issue.

On February 16, the Supreme Court raised the 270 tmcft share of Cauvery water for Karnataka by 14.75 tmcft and compensated Tamil Nadu by allowing extraction of 10 tmcft groundwater from the river basin.

The court had granted six weeks to the Centre to formulate a scheme to ensure compliance of its 465-page judgement on the decades-old Cauvery dispute, modifying the Cauvery Water Disputes Tribunal award of 2007.

The six-week period ended on March 29.

Source: PTI© Copyright 2020 PTI. All rights reserved. Republication or redistribution of PTI content, including by framing or similar means, is expressly prohibited without the prior written consent.
Related News: IPL, TVK, Cauvery Management Board, VCK, Bharathirajaa
SHARE THIS STORYCOMMENT
Print this article 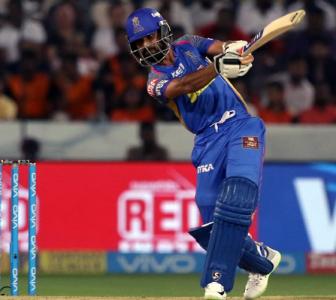 Rahane rues lack of partnerships after loss to Sunrisers 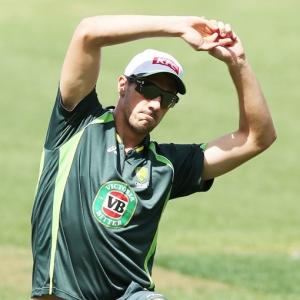 Pat Cummins ruled out of IPL