Shaun Marsh's sensational strokeplay helped Kings XI Punjab edge past Rajasthan Royals via the Super Over after the match had finished in a tie in the Indian Premier League, in Ahmedabad, on Tuesday.

This was Rajasthan's first defeat after five straight wins in IPL 8, while Punjab ended their three match losing run and climbed to fifth with their second victory from five matches. 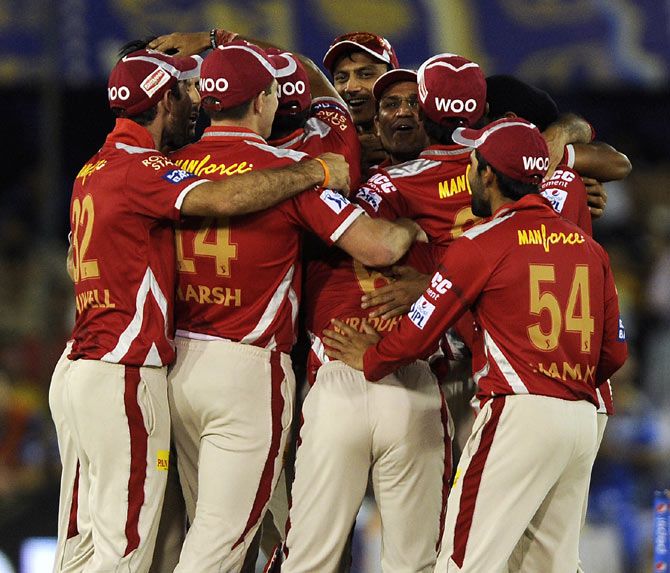 Marsh, playing his first match of the tournament, smashed 65 fromn 40 balls, and David Miller blasted 54 from 30 balls to help Punjab chase down Rajasthan's huge score as both teams finished on identical scores of 191 for six in their 20 overs.

Punjab, who batted first in the Super Over, lost a wicket off the very first delivery when Miller missed a full toss from Chris Morris and was leg before wicket for a duck. Marsh rallied his team with three consecutive boundaries as they posted 15 runs in the over.

In reply, Rajasthan also suffered an early blow when Mitchell Johnson bowled compatriot Shane Watson with a superb yorker off the very first delivery. Steven Smith then slashed a high full toss for a four but James Faulkner was run out off the third ball courtesy of some sharp glove work from wicketkeeper Wriddhiman Saha as Rajasthan lasted just three deliveries to go down in a close finish.

Punjab had got off to a horror start as stand-in captain Virender Sehwag (2) was run out Steve Smith, who produced a direct hit from mid-off.

Murali Vijay (21) hit a glorious straight six off Stuart Binny and another one off Praveen Tambe before was unfortunately run-out backing up too far against leg-spinner Rahul Tewatia, who stopped a drive from Marsh on his follow through and quickly flicked it back on to the stumps. Glenn Maxwell's dreadful IPL continued as he hit a short ball from Tewatia straight into the hands of Steven Smith at deep midwicket to fall for one.

While wickets fell from the other end, Marsh continued his positive approach and went after Tewatia, whom he hit for a straight six to complete his half-century from just 32 balls.

After Marsh's departure, Miller took up the mantle as he smashed Faulkner for back to back sixes, in the 16th over. Wriddhiman Saha boosted Punjab's hopes further with three boundaries off Morris before he was bowled in the same over attempting the paddle sweep.

Rajasthan were made to pay dearly for their fielding lapses in the closing stages. Mitchell Johnson was dropped by Rahane, who came rushing in from long-on but failed to hold on to the catch in the 19th over, while wicketkeeper Sanju Samson missed an easy run out opportunity in the final over before Axar Patel slashed the final through the off-side for a four to send the match into a Super Over.

Earlier, Rahane continued his good recent run with another sparkling half-century which enabled Rajasthan Royals post a mammoth 191 for six against Kings XI Punjab in their 20 overs. The Rajasthan opener smashed his way to 74 off 54 balls with six boundaries and two sixes as he laid the foundation for a reasonable total adding 95 for the opening wicket with skipper Shane Watson, who hit a fluent 45 from 35 balls.

Left-arm spinner Axar Patel was the pick of the bowlers for Punjab as he claimed two for 30.

It was Rahane, who set the tone with a flurry of boundaries as Watson was content playing the singles and giving more strike to the India international.

Out of his first five boundaries, Rahane hit four off Mitchell Johnson, which included, a pull, a couple of cut shots and a whip over square leg early in his innings. Watson took his time to get going before he cut loose in the ninth over of the innings, launching into off-spinner Shivam Sharma.

Watson hit the spinner for three boundaries and a six to race to 36. He clobbered another six off Patel before the spinner had the last laugh.

It took an inspirational piece of glovework from wicketkeeper Wriddhiman Saha that saw Watson being stumped down the leg side off Patel.

Young Deepak Hooda didn't last long, scoring 19 off 9 balls as Rahane completed his half-century with a six over square-leg off Anureet Singh from just 40 balls.

The in-form Steve Smith lasted just one delivery as he was brilliantly caught by Glenn Maxwell at deep midwicket off Axar. Glenn Maxwell takes a catch to get the wicket of James Faulkner. Photograph: BCCI

Johnson captured the big wicket of Rahane, who was caught behind by wicketkeeper Saha, in the 18th over, as he went for the big shots in the death overs.

Maxwell came up with another superb catch at long-on, taking a high catch over his head as he timed his jump to perfection to get rid of James Faulkner (1) off Sandeep Sharma, in the very next over.

Karun Nair hit a quickfire 25 off 13 balls before he was dismissed in the final over of the innings by pacer Anureet Singh.

Stuart Binny ended the innings in smashing fashion as he slammed Anureet for a four and a six from the final two deliveries of the Rajasthan innings to take them to a huge total. 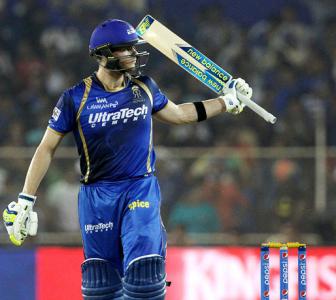 Smith reveals the secrets of his success Royals v CSK: Who will win the battle of supremacy? Kings XI Punjab have task cut out against reigning Royals 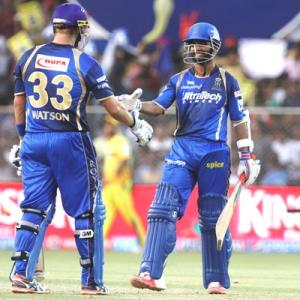