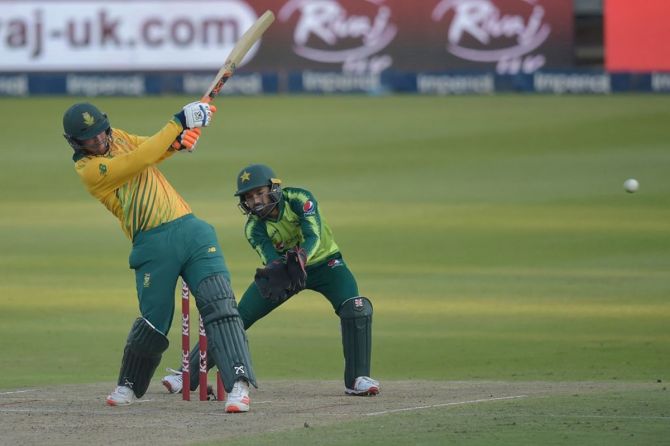 IMAGE: Aiden Markram led the reply as he blasted 54 from 30 balls. Photograph: ICC/Twitter

South Africa opener Aiden Markram struck a brisk half-century as the hosts levelled the four-game Twenty20 International series against Pakistan with a six wicket win in the second match at The Wanderers on Monday.

Pakistan elected to bat, but some poor stroke-play saw them restricted to 140 for nine in their 20 overs, well below par on one of the best batting wickets in world cricket.

South Africa never looked troubled in their reply as they reached their target with 36 balls left in a comprehensive win for a side missing seven leading players who are either injured or have been released to play in the Indian Premier League.

Pakistan’s innings got off to a somewhat bizarre start when in-form opener Mohammad Rizwan danced down the wicket to left-arm spinner George Linde (3-23) off the very first ball and was easily caught at mid-off by Markram.

Captain Babar Azam (50 from 50 balls) and Mohammad Hafeez (32 from 23) were the only batsmen to manage a score above 12 as seamer Lizaad Williams (3-35) and leg-spinner Tabraiz Shamsi (1-22) bowled excellent spells for the home side.

Markram led the reply as he blasted 54 from 30 balls, with 46 of his runs in boundaries as he smashed seven fours and three sixes in an aggressive showing.

The third match of the series will be played in Pretoria on Wednesday.