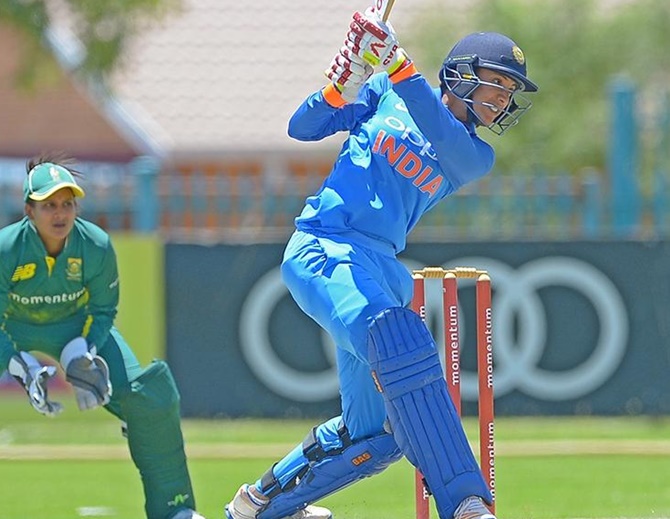 Opener Smriti Mandhana slammed a quickfire 135 as Indian women's cricket team produced yet another clinical display to beat South Africa by 178 runs in the second ODI and clinch the three-match series in Kimberley on Wednesday.

By virtue of this win, India have taken an unassailable 2-0 lead in the series, which is part of the ICC Women's Championship.

Sent into bat, left-handed Mandhana started from where she left in the first game and smashed 135 off just 129 balls to form the base for India's 302 for three.

She hit 14 boundaries and a six en route to her century. Incidentally, this is Mandhana's second ODI century against South Africa.

Mandhana had earlier made a 98-ball 84 in India's 88-run win over South Africa in the first ODI.

Besides Mandhana, Harmanpreet Kaur (55 not out) and Veda Krishnamurthy (51 not out) contributed to India's total.

Opener Punam Raut (20) and skipper Mithali Raj (20) also got starts but failed to prolong their stay at the crease.

All the South Africa bowlers looked helpless in front of the Indian batswomen as they could just manage to take three wickets with Sune Luus registering best figures of one for 31.

Just like the first ODI, Indian bowlers too were clinical in their approach, bowling out South Africa for just 124 runs in 30.5 overs to register yet another massive win.

Leg-spinner Poonam Yadav excelled with the ball for India with figures of four for 24, while left-arm spinner Rajeshwari Gayakwad (2/14) and offie Deepti Sharma (2/34) shared four victims between them.

South Africa's struggle against the Indian attack can be gauged from the fact that only two of their batswomen could manage double digit scores.