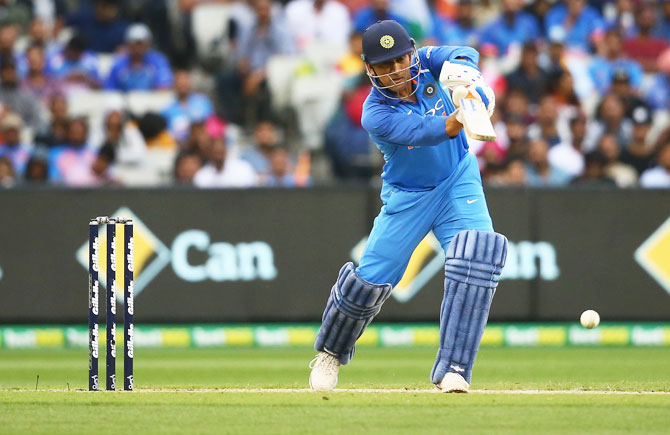 IMAGE: Batting at number four, Dhoni, who generally bats at number six, said he is 'happy to bat at any position, based on requirement of the team'. Photograph: Mike Owen/Getty Images

Former skipper Mahendra Singh Dhoni on Friday said he has no preference and is ready to bat at any position in the batting order as per the need of the team.

Dhoni was adjudged the Man of the Series after guiding India to a comfortable seven-wicket win in the third ODI, thus securing India a maiden 2-1 series win in Australia.

Batting at number four, Dhoni, who generally bats at number six, anchored India's chase with a 114-ball 87 not out, which was studded with six boundaries.

"I am happy to bat at any number. The important thing is where the team needs me," said Dhoni, when asked where he wants to bat.

Dhoni and Kedar Jadhav shared a 121-run partnership for the unconquered fourth wicket while chasing a tricky target of 231.

Asked what the game plan was, Dhoni said: "It was a slow wicket, so it was difficult to hit whenever you wanted to. No point going after the bowlers who were bowling well, so we wanted to take it deep and that was the plan.

"…Of course supported brilliantly by Kedar, who plays unorthodox shots. He did a great job in executing."