Making Dhoni mentor is a way to use his experience for T20 WC: Ganguly 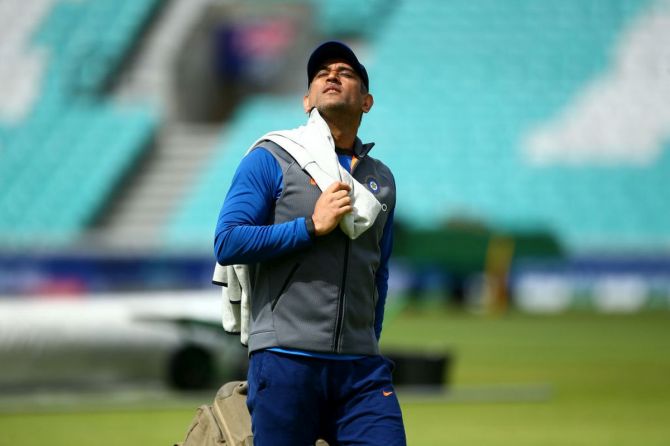 IMAGE: MS Dhoni was roped in as a mentor for the T20 World Cup. Photograph: Charlie Crowhurst/Getty Images

BCCI President Sourav Ganguly on Thursday said Mahendra Singh Dhoni was appointed as mentor of the Indian team to use his vast experience for the benefit of the side during the upcoming T20 World Cup in the UAE.

The BCCI sprang a surprise when it announced on Wednesday that Dhoni will be the team mentor for the T20 World Cup beginning on October 17. "Dhoni's addition to the side is a way to use his experience for the T20 WC. I also thank Dhoni for accepting BCCI's offer to help the team for this tournament," Ganguly said in a BCCI tweet.

He is currently with his IPL team Chennai Super Kings, gearing up for the resumption of the league from September 19 in the UAE.

‘Dhoni's experience of handling pressure could be huge advantage’ 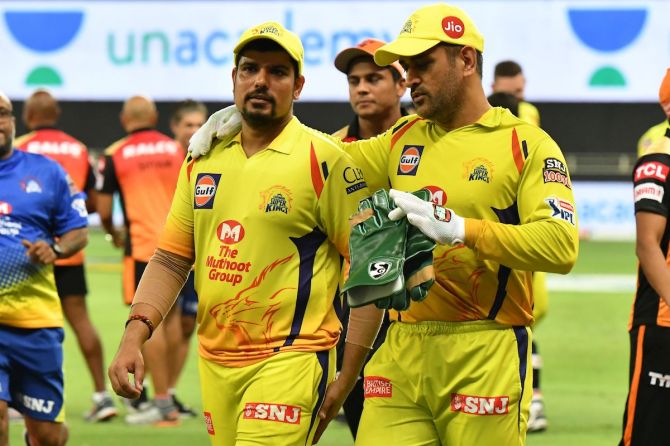 IMAGE: MS Dhoni has regularly helped out spinners and pacers during his playing days. Photograph: BCCI

Former India batsman Gautam Gambhir reckons MS Dhoni's experience of handling pressure in important games will be a huge advantage for the young players picked in the T20 World Cup squad. Gambhir's remarks came after Dhoni was named as Team India's mentor for the upcoming T20 World Cup. BCCI secretary Jay Shah had made the announcement on Wednesday.

"A good story to have, but I'm sure his (MS Dhoni) role will be defined because you've got the head coach, the assistant coach and the bowling coach. So, I'm sure there has to be something from Virat Kohli or Ravi Shastri on what they would want apart from what they already have because India has been very successful in T20 Cricket. It's not like India has struggled in T20 Cricket," Gambhir said on Star Sports' show 'Follow The Blues'.

"Had India struggled in T20 cricket, they might have had to get someone from outside, but Dhoni's experience and his mindset of handling pressure in those crunched games could be one reason why they've got him as a mentor -- not purely from the skill point of view, because these guys have got all the skill, to go out there and deliver. It's probably, how to handle pressure during those important games because India had missed out on those important games -- especially the knockout games," he added.

Further talking about Dhoni, Gambhir said: "So probably MS' Dhoni's experience of captaining this side and handling that pressure in those important games could be a huge advantage for young players. And you have to remember that most of these guys are young, for example, your Rahul Chahar and Varun Chakravarthy or any of these batters play -- they've not been to any of the World Cups. So, I'm sure MS will share his experience."

"That probably is the only thing I can think of; apart from that, I don't see MS Dhoni change anything from a skill point of view. Ravi Shastri's been there, Vikram Rathour has been there, and the entire support staff is there. So, probably MS can only add his experience to the players while probably going into the crunch games," he added.

‘Fabulous decision by BCCI to have Dhoni as mentor’ 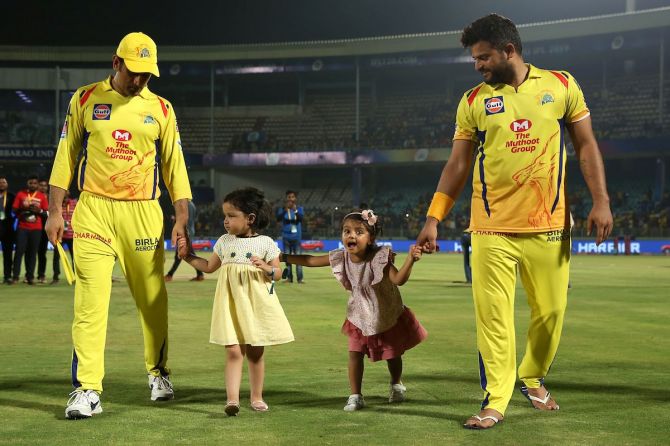 IMAGE: Suresh Raina will team up with MS Dhoni for the upcoming IPL in UAE. Photograph: BCCI

Former India batsman Suresh Raina has said that the Board of Control for Cricket in India (BCCI) has taken a fabulous decision to appoint MS Dhoni as a mentor for the Virat Kohli-led side for the upcoming T20 World Cup.

"All the very best to #TeamIndia on the upcoming T20 World Cup, the selected squad looks very balanced. Good to have @ashwinravi99 back in the team, and a fabulous decision by @bcci to have the man himself @msdhoni bhai as the mentor," tweeted Raina.

BCCI secretary Jay Shah on Wednesday said that he spoke with former skipper MS Dhoni on being the mentor for the upcoming T20 World Cup, and added that the current team management is on the same page about the decision.