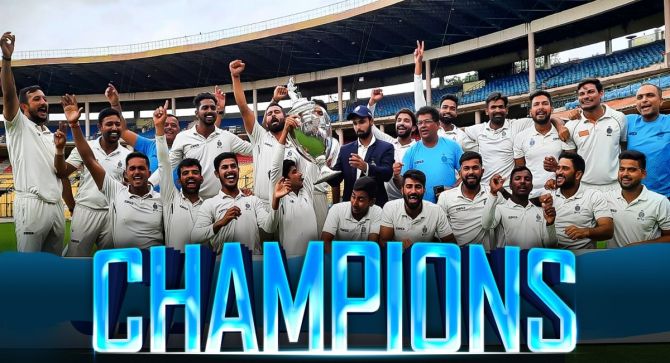 IMAGE: Madhya Pradesh's players celebrate with the Ranji Tropy after defeating 41-time champions Mumbai in the final at the Chinnaswamy Stadium, in Bengaluru, on Sunday. Photograph: BCCI/Twitter

The triumph was more significant because they defeated the 41-time champions Mumbai with much to spare.

It was an achievement of sorts for MP's coach Chandrakant Pandit, who exorcised the ghosts of losing one final at the same venue 23 summers ago. He picked a record sixth national title as a coach. Mumbai began the final day of the match on 113 for 2, with Armaan Jaffer 30 not out and Suved Parkar on 9. The duo put on a 56-run stand, which ended with Jaffer's dismissal by pacer Gaurav Yadav for 37.

Parkar was joined by Sarfaraz Khan, the man-in-form. The duo went on to add another 53-runs before Parkar was out for 51 by spinner Kumar Kartikeya, who also dismissed Yashasvi Jaiswal for 1.

Khan and Shams Mulani then stitched a 34-run stand after the mini-collapse. Mulani was dismissed for 17, run-out by Saransh Jain, ending the duo's resistance.

IMAGE: Kumar Kartikeya did the star turn for Madhya Pradesh, finishing with four wickets in Mumbai's second essay on the Day 5 of the Ranji Trophy final in Bengaluru on Sunday. Photograph: BCCI/Twitter

Sarfaraz fell shortly after that for 45, dismissed by spinner Parth Sahani, with assistance from the safe hands of Anubhav Agarwal.

At this point, Mumbai was 236 for 7, but the rest of the Mumbai batting could do much and they were bundled out for 269. Mumbai gained a slender lead of 107, setting MP a target of 108 to take home their maiden Ranji Trophy.

Chasing 108, Madhya Pradesh were off to a tricky start as they lost opener Yash Dubey for just 1, veteran Mumbai pacer Dhawal Kulkarni dislodging his stumps.

Then Shubham Sharma and opener/wicketkeeper-batter Himanshu Mantri added 52-runs for the second wicket. The stand ended when spinner Mulani clean bowled Mantri for 37.

This brought Parth Sahani to the crease, but he fell shortly after for just 5 to Mulani.

Rajat Patidar, MP's best batter this season, came in and joined Shubham on the mission to take his team to the target.

The duo did not have to toil for runs that hard, though Shubam was back in the pavilion after scoring 30 with the team needing seven more.

He was caught by Armaan Jaffer, who took a great diving catch off a Mulani delivery. Captain Aditya Shrivastava joined Patidar and the pair easily hit up the remaining runs as MP finished at 108 for 4.

Patidar hit the winning runs, sending his team into ecstasy.

Kumar Kartikeya, with figures of 4 for 98, was the star for Mumbai with the ball and Gaurav Yadav and Parth Sahani took two wickets each.