IMAGE: Pakistani cricket fans light fireworks as they celebrate at a park in Karachi after Pakistan's victory over India in the Twenty20 World Cup super 12 Stage match in Dubai on Sunday. Photograph: Akhtar Soomro/Reuters

"Congratulations to the Pakistan Team & esp(ecially) to Babar Azam who led from the front, as well as to the brilliant performances of Rizwan & Shaheen Afridi," said Prime Minister Imran Khan, who led Pakistan to triumph in the one-day World Cup in 1992.

"The nation is proud of you all," he tweeted.

His congratulations were echoed by the chief of the army staff, underlining the political symbolism of the win.

The Chairman of the Pakistan Cricket Board, Ramiz Raja also tweeted that it was a proud moment for all Pakistanis.

"Alhamdolilla…It's the first one, the most magnificent one but remember journey has just begun.. such a proud moment for all Pakistanis and thank you boys for providing us this moment to cherish."

Farhan, a university student, had driven down to the Seaview beach area soon after the match to celebrate the victory as loud music and patriotic songs played from stereo decks in many cars, which honked horns near the beach as police tried to control the increasing traffic.

Many fans had Pakistani flags waving from the windows of their cars.

"It is not just the fact that we have beaten India for the first time in a World Cup after so many attempts but the way we did it that is something to cherish," Farhan said.

One could also hear people cheer loudly from apartment buildings and houses in the upscale Clifton and defence areas.

All roads in Karachi wore a deserted look before the match but soon after it ended the fans started pouring onto the streets.

In Karachi, fans poured onto the streets immediately after the final ball was bowled, waving Pakistani flags from motorcycles and car windows.

Pakistani media also reported loud celebrations in parts of Kashmir, a Muslim majority region that has been at the heart of much of the tension between the two countries.

Naveen Jan, a housewife who came with her family to Seaview to join the celebrations, said it was a moment to rejoice but the real celebration would now be when Pakistan wins the World Cup.

"It is just the beginning of the tournament. A lot of hard work remains to be done but to beat India for the first time is so special. I have waited for 15 years since I started following cricket for this day," she said.

The Pakistani win comes at a time when the diplomatic relations between the two countries are at a low.

India has frozen bilateral cricket ties with Pakistan ever since the Mumbai terror attacks in which hundreds lost their lives.

In the winter of 2012, Pakistan did tour India for a short white-ball series but the two teams have only met in either ICC events or the Asia Cup tournaments.

The two neighbours have clashed repeatedly over the years, most recently in 2019 when Indian jets launched a raid into Pakistan over a militant attack in Indian-controlled Kashmir that killed 40 police.

On the field, however, players from both sides embraced and chatted warmly after the match. 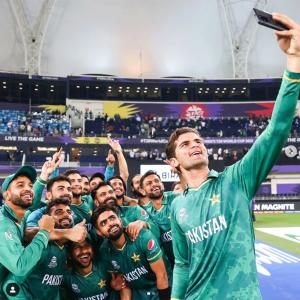