'I am planning to practice against wet tennis balls from 18 yards, and also with plastic balls on concrete pitches, to reduce my reaction time for strokes'

It was during a drinks break in the Vijay Hazare Trophy match between Tamil Nadu and Karnataka on Monday that K L Rahul got the news of being selected to India’s Test team for the tour of Australia, but, at that time, he was only concerned about winning the ongoing match.

"We were fielding against Tamil Nadu today (at Secunderabad) when the substitute fielder came at the drinks break to inform me about my selection and also that Robin (Uthappa) and Vinay (Kumar) have been included in the One-Day squad against Sri Lanka. It felt nice as we also won by big margin," said the soft-spoken lad.

After scoring 185 and 130 for South Zone in the Duleep Trophy final against Central, Rahul was always in contention for as berth in the Test squad. 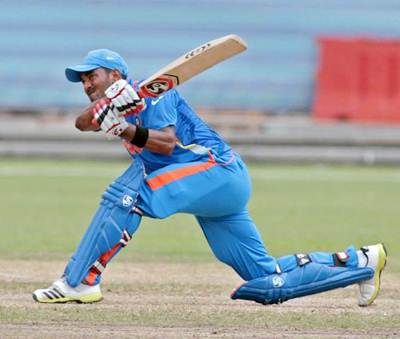 "Frankly speaking, I was not even aware that selectors were present (during the Duleep Trophy final). Also, I was more into a zone where I wanted to score a big hundred. On the opposite side there was Pankaj (Singh), who has recently played Test match for India; there is Piyush (Chawla), who has played for India and Ishwar (Pandey), who was with the national team. So it was a potent bowling attack.

"Also, at the back of my mind, there was one thing. I knew that I have to play without pressure as this was certainly not my last chance to impress the national selectors," said the 22-year-old, who has scored 2100 runs in 27 first-class games, at an average of 51.21, including six centuries.

Australia will be a completely different ball game and Rahul knows that he will have to prepare well in the interim for the tough test ahead.

"If I have got results this season, it was because of the hard work put in during off-season with my coach, Samuel Jayaraj.

"Once I am back in Bangalore, I am planning to practice against wet tennis balls from 18 yards, and also with plastic balls on concrete pitches, to reduce my reaction time for strokes," said Rahul.

Asked if he is thinking about reducing the weight of his bat, Rahul replied, "No I haven't thought about reducing the weight of my bat. I didn't do that when I went to Australia with India ‘A’, but, yes, I would use bats which would have the "sweet spot" a bit on the higher side rather than the meat being at the bottom. These are my little ways of preparing for the tour."

Asked if he had ever batted better than he did in the Duleep Trophy final, Rahul said, "Those two centuries were certainly special, as it came on the big stage but I believe I have played better innings under tougher circumstances for my state Karnataka during Ranji Trophy."