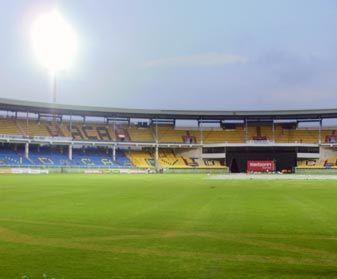 In the wake of the Supreme Court order on reforms in the Indian Cricket Board, former BCCI vice-president Gokaraju Gangaraju quit as secretary of Andhra Cricket Association while GVK Ranga Raju has taken over as the head of the state unit.

The Executive Committee of the Andhra Cricket Association was held on Monday in Vijayawada where Ranga Raju was elected the president in place of DVSS Somayajulu.

Arun Kumar will be new General Secretary while V Durga Prasad as the joint secretary. PV Deva Varma is the new vice president while KS Ramachandra Rao takes over as the treasurer.

The vacancies are caused by demitting of office by the three office bearers - Somayajulu as president, Ganga Raju as general secretary and MA Rahim as treasurer.

Ganga Raju had earlier demitted office as BCCI vice-president as he had already completed nine years as office bearer of both state and national body.

on Monday tendered their resignations from their respective posts citing the maximum tenure rule.

The officials tendered their resignations in Ahmedabad in the presence of GCA vice president Parimal Nathwani.

Contractor was associated with GCA for around 12 years while Patel was with the cricketing body for around nine years. Jogani was serving as treasurer since the last five terms.

On January 2, the Supreme Court had asked the BCCI and all the state associations to implement the recommendations of the committee headed by former Chief Justice of India Justice Rajendra Mal Lodha.

Meanwhile, Nathwani said the entire cricketing fraternity should not be punished for the wrongdoings of a few people.

"The action taken by Supreme Court is very painful. Such a harsh step on us is very unfortunate. Entire cricket has been punished for the wrongdoings of a few people. However, we respect the order of the Supreme Court and we do not wish to comment anything against it," he added.
© Copyright 2021 PTI. All rights reserved. Republication or redistribution of PTI content, including by framing or similar means, is expressly prohibited without the prior written consent.