'Anyone who suggest for one millisecond, he was trying to do something untoward, way out of line.' 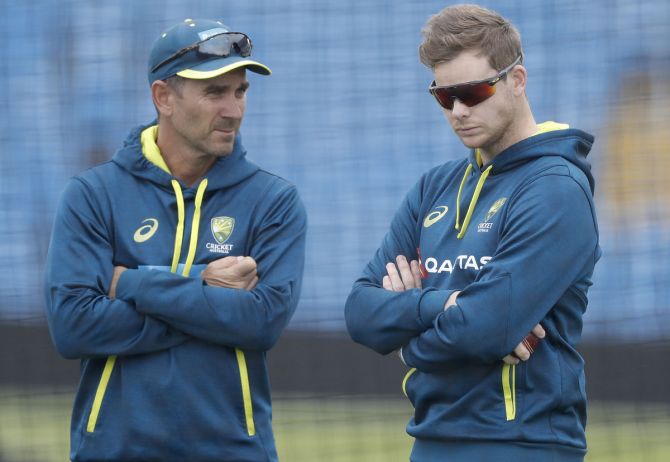 Australia coach Justin Langer cannot believe the 'absolute load of rubbish' that Steve Smith was trying to scuff up Rishabh Pant's guard in the drawn Sydney Test, and has called the criticism out of line and ludicrous.

Smith was accused of scuffing up the batsman's guard during the drinks break on the fifth and final day of the third Test at SCG on Monday, which ended in a draw.

But Langer backed Smith to the hilt, coming down heavily on the criticism, mostly driven by fans online and some former players like Michael Vaughan.

"...I literally cannot believe some of the rubbish I read about Steve Smith. Absolute load of rubbish. I mean, if anyone knows Steve Smith, he is a bit quirky and he does some weird (stuff) and we have laughed about it for the last couple of years," Langer said on Wednesday.

"I have spoken about it publicly, privately about how he is a bit quirky. What Steve Smith does at the crease, he does it probably most games, he is just thinking about the game," the coach added.

Langer said Smith has been exemplary on and off the field since he has made his comeback following the ball-tampering scandal.

"Anyone who suggest for one millisecond, he was trying to do something untoward, way out of line. On that wicket, it was that flat, it was like concrete, you need 15 inches spikes to make an intent on the crease and he went nowhere near the crease.

"Seriously, I thought that was absolutely ludicrous," said Langer.

Langer said the batting star faced a barrage of abuse on his return to cricket after the ball-tampering ban, especially on the tour of England, but never made a big deal of it, carrying on with utmost sincerity.

"In the last couple of years since he has been back, he has been exemplary on and off the field, he has let his bat to the talking.

"He was abused like I have never seen anything through England and he just kept smiling and doing his bat do the talking, give me a break...give me a break," the head coach said.

The fourth and final India-Australia Test starts in Brisbane from Friday.