Brian Lara, who was made an offer to play for the International XI in the two Twenty20 exhibition matches in Karachi, refused it because he was concerned about the message his participation would send out, given that the Pakistan Cricket Board (PCB) had distanced itself from the T20 games.

"Yes, an offer was made to me...Until such time as the governing body in Pakistan , PCB, is able to convince the rest of the world that the best safety mechanisms have been put in place, and the International Cricket Council (ICC) agrees, I would have to say no," the Daily Times quoted the former West Indian cricketer, as saying. 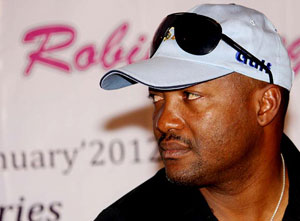 The PCB had issued No Objection Certificates to its contracted players to play the games and allowed the use of the venue, but maintained the games were unofficial and unsanctioned.

"The PCB has released its players for the matches. The board has also permitted the use of National Stadium for these matches. But all other obligations including security, anti-corruption, marketing and broadcasting etc are direct responsibility of the organiser and were to be managed by him," a PCB media release had stated.

Sindh sports minister Mohammad Ali Shah, with the support of the Karachi government, arranged all logistic and security arrangements as well as the broadcasting deal. It was reported that the total cost of staging the matches was Rs 3 crore, the paper said.

The T20 matches between the International XI and a Pakistan All Stars XI at the National Stadium marked the return of international players and cricket, albeit unofficially, to Pakistan for the first time since the terror attack on the Sri Lankan team bus in March 2009.