Former Indian Premier League commissioner Lalit Modi on Friday questioned the IPL Governing Council's move to change the players auction norms for the fourth season of the T20 league at the last minute.

Modi, who was suspended as the chairman and commissioner of the league after the last year's IPL final on charges of alleged financial bunglings and rigging of bids, questioned the transparency of the process after players were auctioned through a pre-decided order of auction list.

"The changing of players' auction order as pointed by some franchisees is an issue which I highlighted when I saw the rules changed last minute. 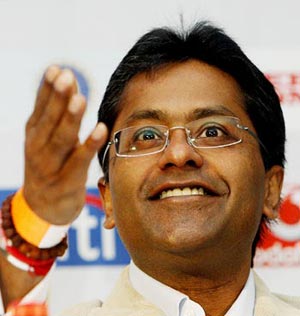 "The order changing -- should not have been allowed  as it gives advantage to teams that knew of it before," Modi wrote on his Twitter page.

Mumbai Indians had on Thursday accused the IPL GC of changing the auction norms in the last minute without proper reason.

In a letter written to the GC members, Indiawin Sports Pvt Ltd (ISPL), owners of the Mumbai Indians team, said players were auctioned through a pre-decided order of auction list, as opposed to an initial instruction that they would be arranged into sets and the order for which is to be drawn randomly.

The change in the norm was intimated to the franchisees on January 7, just a day before the auction.

Modi added that the GC members should look into the matter as to why the management decided to change the auction order.

"Some key players were put into second day. Why? Take a guess?"

According to initial auction rules, marquee players were to be auctioned off on the first and then other players would be grouped into four sets -- batsmen, bowlers, all-rounders and wicket-keepers -- to be auctioned in an order determined by a random draw that was to take place in the auction room.

But before the two-day auction on January 8 and 9, franchises were told that the auctioning of these player sets would instead be fixed by a "pre-decided" order.

Modi, launching a veiled attack on BCCI secretary N Srinivasan who had last year filed a complaint with the Chennai police commissioner against suspended IPL chief alleging him of irregularities to the tune of Rs 470 crore, further wrote that raising of auction norms matter will result in more warrants being issued against him.

"Me raising these issues will off course get old guard rallied up against me and I am sure more warrants will be issued by there cronies in Chennai," he said.