IMAGE: Pakistan pacer Naseem Shah had figures of 2 for 40 on Day 1 of the 3rd Test in Lahore on Monday. Photograph: PCB/Twitter

Quick bowlers Shaheen Shah Afridi and Naseem Shah picked up two wickets apiece on Monday to lead Pakistan's inspired performance against Australia on the first day of the deciding third and final Test in Lahore.

Afridi, 21, did the early damage, striking twice in his second over to dismiss opener David Warner for seven and No. 3 Marnus Labuschagne before he had scored, to reduce Australia to 8-2 after they won the toss and opted to bat.

Naseem, 19, drafted into the Pakistan side in place of all-rounder Faheem Ashraf, hurt the tourists in the final session, dismissing a well-set Steve Smith for 59 and Travis Head for 26 as Australia reached 232-5 at close.

All-rounder Cameron Green was unbeaten on 20 for Australia with wicketkeeper-batter Alex Carey eight not out.

After their shaky start, it was opener Usman Khawaja who led Australia's fightback with a resilient 91, adding to scores of 97, 160 and 44 not out in his last three innings in his country of birth.

The left-handed Khawaja, who added 136 for the third wicket with Smith, appeared set for his 12th Test hundred before Pakistan captain Babar Azam completed a one-handed catch at slip off spinner Sajid Khan.

Khawaja said some deliveries from the spinners were already gripping and turning and he felt a first-innings total of close to 350 would be good for Australia.

"This one (wicket) is probably some of the toughest to score runs on," the 35-year-old told reporters, adding that he physically struggled during his knock on a hot day.

Smith, Australia's batting mainstay, completed his third successive half-century before he was out leg before wicket to a straight delivery from Naseem.

The first two Tests of the series -- the first between the sides in Pakistan since 1998 -- were drawn.

"The pitch was a bit slow and also kept a bit low," Naseem said.

"Our first target is to dismiss Australia under 300. I think we will get a result on this pitch."

Lahore's Gaddafi Stadium was hosting a Test match for the first time since the 2009 attack by gunmen on a bus carrying the Sri Lankan cricket team.

After left-armer Afridi's two early wickets, Australia could have been in even deeper trouble but Pakistan failed to capitalise on chances offered by Khawaja and Smith.

Looking to dominate left-arm spinner Nauman Ali from the onset, Khawaja, on 12, flashed hard at a full-pitched delivery but the edge flew under the hands of Babar Azam in the lone slip position.

On the next delivery, Nauman failed to hold a straightforward return catch from Smith, who was on 19. Off-spinner Sajid also spilled a return catch off Head when he was on seven.

© Copyright 2022 Reuters Limited. All rights reserved. Republication or redistribution of Reuters content, including by framing or similar means, is expressly prohibited without the prior written consent of Reuters. Reuters shall not be liable for any errors or delays in the content, or for any actions taken in reliance thereon.
Related News: Usman Khawaja, Steve Smith, Naseem Shah, Australia, Shaheen Shah Afridi
COMMENT
Print this article 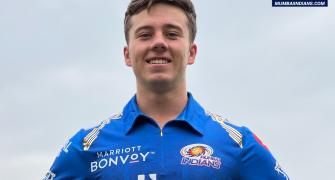 Watch Out For Baby AB! 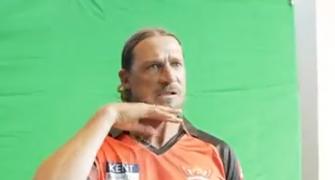 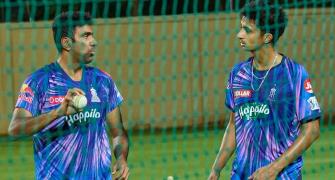 When Ashwin got philosophical