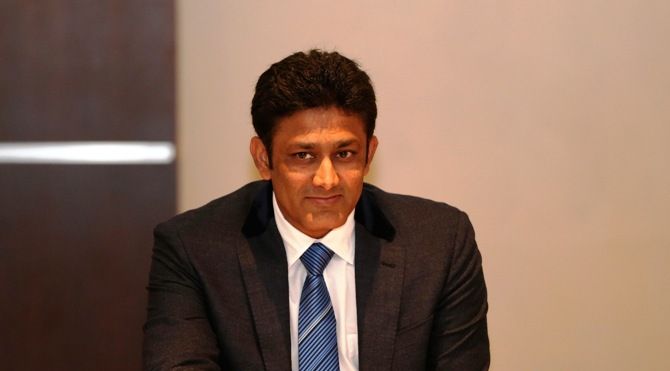 The ICC's Anil Kumble-led Cricket Committee will discuss issues concerning the epic World Cup final, including the controversial boundary count back rule, in its next meeting, said the apex body's general manager of cricket Geoff Allardice.

Cricketers -- current and former -- shared New Zealand's pain on losing the World Cup title to hosts England on boundary count back rule following an epic final at the Lord's on July 14.

In a pulsating encounter, England were adjudged the winners of the World Cup on the basis of their superior boundary count - 22 fours and two sixes -- to New Zealand's 17 after the the match ended in a tie after regulation play and subsequent Super Over.

"The cricket committee will consider any issues arising from the World Cup final when it next meets (in the first quarter of 2020)," Allardice was quoted as saying by ESPNcricinfo.

"A Super Over has been used to determine a winner in a tied match in ICC events since 2009 (replacing the bowl-out), and the tiebreaker after a tied Super Over needed to be derived from something that happened in that particular match. So it has always related to the number of boundaries scored in the match."

Continuing, he said the boundary count back rule was followed as it is in practice in T20 leagues across the world.

"Almost all the T20 leagues around the world also use boundaries as the tiebreaker in their Super Overs. We wanted to use the same Super Over regulations that are used across all professional cricket and that's why it was the way it was. Whether it should be different is something that our cricket committee will consider at some point," Allardice said.

The ICC's chief executives committee (CEC) did not deliberate at its annual conference on whether sharing the World Cup could be an option in future.

"No, that wasn't discussed. The consistent view has been that the World Cup final needs a winner, and a Super Over was in the playing conditions to decide a tied final in each of the last three World Cups," he said.

Virat Kohli has said that he has been looking forward to the World Test Championship, which begins with the Ashes on August 1, and Allardice said it is encouraging.

"Yes, it is very encouraging to hear those comments. I know players love playing Test cricket. For the first time there is a real context to the matches they play that extends beyond a particular series.

"I know the Test rankings have done a good job over a long period of time in the sense of identifying the best team, but to be able to compete on a points table and play for a spot in the final will add a new element to Test cricket and will make it more interesting to people from the countries not involved in that particular match," Allardice said.