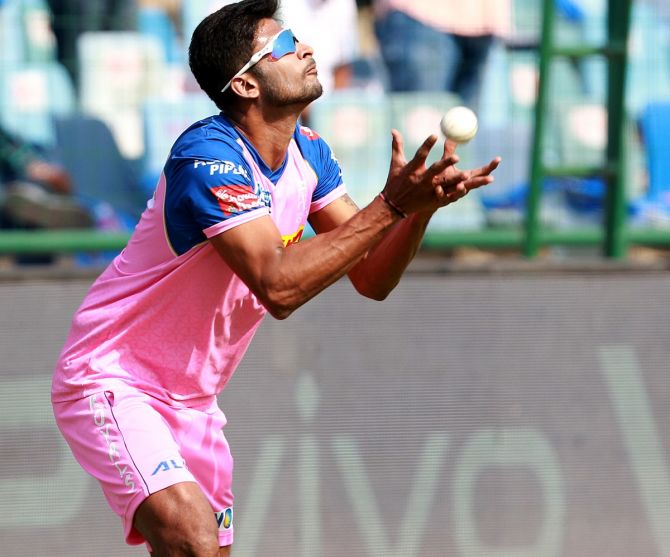 Krishnappa Gowtham was nicknamed 'Bhajji' by his teammates during his early years and he has adored Ravichandran Ashwin's cricketing philosophy but the all-rounder's skill-sets, including the 'carrom ball', is his own customised version.

Gowtham is among the six uncapped players picked for India's white-ball tour of Sri Lanka, comprising three ODIs and three T-20 matches between July 13 and July 25.

"You live a dream for years and now it has come true and you can't be more happier," was Gowtham's first reaction.

A consistent performer for a formidable Karnataka side, Gowtham hit the headlines when Chennai Super Kings broke the bank to win his services after an intense bidding war and now at 32, the lanky all-rounder has got his maiden India call-up.

"Starting off in my career I used to mimic Bhajji Paa (Harbhajan Singh) and my teammates would call me Bhajji," Gowtham recollected during the interaction.

So like Bhajji, does he also bowl the doosra?

Has he developed the carrom ball watching its finest exponent Ravichandran Ashwin?

"I developed it on my own. If you have to play at the highest level, you need to develop skills on your own. In my junior days, I have been coached by Erapalli Prasanna sir also."

"Obviously, you do look up to a legend like Ashwin. I love Ashwin's mindset and approach towards the game," the reticent cricketer answered.

Like his teammates from Karnataka, who have gone on to play for India, Gowtham also speaks with a lot of clarity even though his answers are short and precise.

With Moeen Ali starting off during CSK's IPL campaign, Gowtham didn't get a look-in but never did the pressure of Rs 9.25 crore bid price made it unnerving for him.

"I had no pressure going into the IPL. Absolutely not. In a tournament like IPL, you have to back yourself and not worry about the game. You play the game not the price tag," he was crisp in his reply.

From 'Captain Cool' Mahendra Singh Dhoni, the most precious advice that he got was to 'enjoy his game', something that the former India skipper tells all his juniors.

"Mahi bhai had one key advice. You have to be in the present and enjoy the game. He told me to stick to my natural game and do it in the manner I know best."

Gowtham also feels enriched after being part of the senior Indian team set-up during the home series against England earlier this year. He was one of the net bowlers during the four-Test series.

"It's always good to bowl to the best in the country and you get to learn a lot. Obviously it was a great experience being in the Indian set-up and bowling to quality players."

With 12 five-wicket hauls in first-class cricket apart from impressive batting strike-rates of 141 plus (50 over) and nearly 160 (T20) in the white ball format, Gowtham's rise can also be attributed to the fact that he plays for one of the finest domestic teams, Karnataka.

"It really has helped that I have been a part of a very strong Karnataka unit. It's not just about strength but also the fact that it's a very happy unit."

"We all enjoy each other's company which I have always looked forward to and it's a privilege," Gowtham said about the team that in recent years has had Manish Pandey, KL Rahul, Karun Nair, and Prasidh Krishna making the national team.

National Cricket Academy director Rahul Dravid is set to travel with the India white ball team as its head coach and having played for India A under "The Wall", Gowtham said his job would certainly be made easier by his presence.

"If you have played India A, you are aware about how Rahul sir is as a coach and what he would expect from you as a player. So that gives you a better chance of preparing well for the tour when you have earlier played under him. It will be a great learning experience," he signed off.