IMAGE: Virat Kohli has often that Mahendra Singh Dhoni will always be his captain. Photograph: BCCI

Virat Kohli has revealed that only Mahendra Singh Dhoni sent him messages of support during a tough phase of mental struggle after he quit the Test captaincy.

'I can tell you one thing. And that is when I left Test captaincy, I got a message from only one person with whom I had played earlier, and that is M S Dhoni. This is when many people had my number,' Kohli revealed at the first media interaction he addressed after he gave up the captaincy. 'A lot of people gave suggestions on TV, and they have a lot to say, but all those who had my number, no one messaged me. So the thing is, when there is respect, when you have a connection such as this, it shows, because there is security both ways. I don't want anything from him and neither does he. I have never been insecure of him and neither has he,' Kohli said. 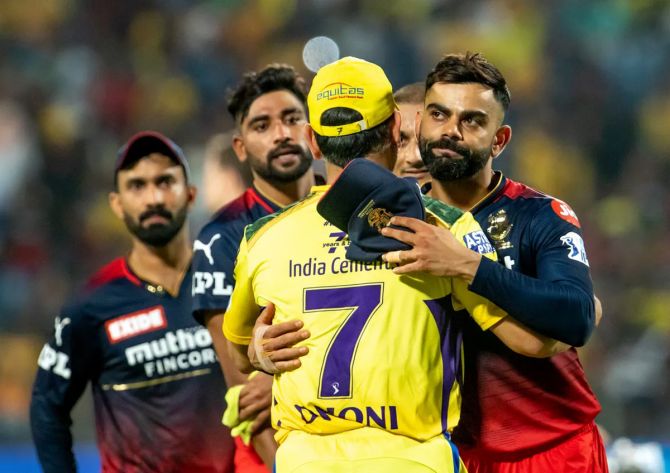 IMAGE: ... even in high intensity encounters like the IPL. Photograph: BCCI
Rediff Cricket