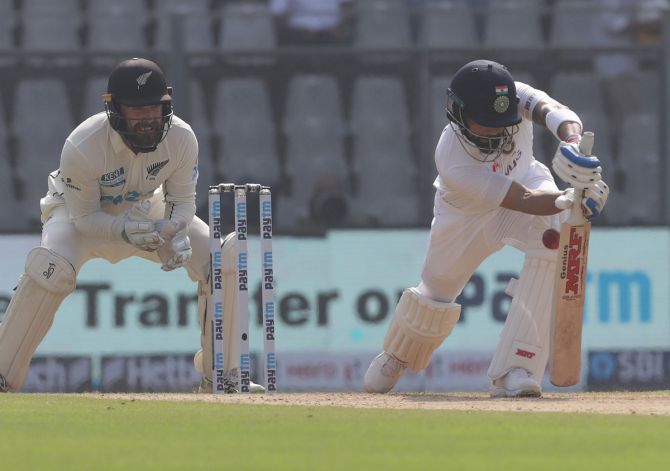 IMAGE: India captain Virat Kohli was trapped leg before wicket for a four-ball duck by New Zealand spinner Ajaz Patel during Day 1 of the second Test in Mumbai on Friday. Photograph: BCCI

The TV umpire could not find conclusive evidence to overturn the LBW decision against Virat Kohli on day one of the second Test against New Zealand in Mumbai on Friday but spin great Shane Warne feels the Indian skipper was 'simply not out'.

Kohli was adjudged leg before by the on-field umpire to left-arm spinner Ajaz Patel though the bat and pad appeared very close to the ball.

"This is simply - not out !!!!! We often discuss technology & its use/accuracy. The main problem@is the interpretation of the technology. Here's a perfect example of the ball clearly hitting the edge of the bat first," Warne tweeted.

Left-arm spinner Ajaz bowled one that straightened after pitching as the Indian skipper tried to play a forward defensive stroke. Umpire Anil Chaudhary gave him out and Kohli immediately asked for a review.

The replay was inconclusive on whether it hit the bat first or the pad and as per rule TV umpire Virender Sharma stuck with the decision of his on-field colleague, leaving Kohli absolutely livid.